Managers and Executives have Higher Employee Engagement than Other Workers 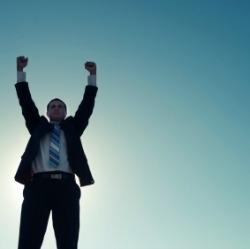 The economy might not have recovered fully from the recent recession, but a new Gallup survey suggests that employee engagement has rebounded. The catch: This morale boost may be trickling down from the top, meaning your boss is probably happier on the job than you are.

The Inquisitr reports that while the survey suggests employee engagement is improving across most sectors, those higher up the corporate ladder may be experiencing the greatest gains. Engagement among "managers, executives and officials" rose an average of 10 percentage points between 2009 and 2012, more than in any other career group measured. The reasons for the boost are a mystery, but Gallup offered some theories. These included that, in tough economic times, top management is driven to help bring a mission of purpose to the business. As well, optimism might first make its appearance in top management because these people typically have a better feeling of control over their futures compared with other lower-level employees. Dean Baker, co-director of the Center for Economic and Policy Research, tends to agree with that last point, according to MSN's Life Inc.

"I suspect that (managers) feel empowered in the current situation," Baker told MSN's Life Inc. in an e-mail. "While managers might be relatively secure in their jobs, most other workers are not."

Another trend identified by the Gallup survey is growing discontent among service professionals. Out of nine sectors surveyed, service is the only one that actually experienced a decline in worker engagement. According to Life Inc., a report published last year by the National Employment Law Project found that low-paying fields -- many of which are service professions -- experienced the largest employment gains in the years following the recession. Kate Lister, president of Global Workplace Analytics, believes this may help explain why service-related workers are increasingly disengaged with their jobs. Service employers can be choosy and find replacements for departing workers, according to Lister.

"Employees know this, and that uncertainty is a contributor to their falling engagement," she said in Life Inc. "There's a lot of fear remaining."

Gallup reports that there is a proven link between employees' workplace engagement and a company's performance. When employees are not inspired by their work, employers are not maximizing their workforces. Overall, 30 percent of all employees nationwide are engaged, which it defines as involved and enthusiastic about their work. Nearly one in five are "actively disengaged," or emotionally disconnected from their work or place of work. The remaining workers are simply "not engaged."