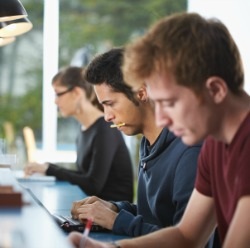 Some experts and public officials -- including President Barack Obama -- have recently suggested that community colleges could play a crucial role in helping close a lingering technical skills gap in the American workforce. A new report, however, suggests that poor high school math and literacy preparation has left many community college freshmen unprepared for even entry-level college courses, let alone the workforce.

The report, "What Does It Really Mean to be College and Work Ready?," was released Tuesday by the National Center On Education And The Economy and suggests that community colleges set the bar low for students during their first year of enrollment, particularly with regard to math and literacy. What is more, many students fail to meet even those lax standards, leaving them ill prepared for the workforce.

The NCEE reviewed tests, assignments, student work and grading at a number of community colleges across the country over the course of two years, reports Education Week. Its findings suggest students do not have a solid grasp of even basic, middle school math concepts, in part because high schools are not adequately preparing them for either college or the workforce.

"Our system makes no sense for these students," Phil Daro, co-chair of the study's Mathematics Panel, said in a press release published by the NCEE. "Even though so many students have a shaky understanding of the middle school mathematics they really need, high school courses spend most of these students' time on topics not needed for their college programs."

In addition, NCEE researchers also found that community colleges have low reading and writing expectations of incoming freshmen. Many students cannot read at the grade level in which their textbooks are written, leading professors to rely on PowerPoint presentations to relay key information. Writing assignments are rare, Harvard professor and co-chair of the study's English Panel Catherine Snow said in the NCEE press release, and when given are not particularly demanding.

Tucker notes in the NCEE press release that the because community colleges often train tomorrow's auto mechanics, EMTs and nurses, students' struggles could have widespread repercussions. "If the United States does not fix this fast," he said, "its citizens will face a bleak economic future."

But as Inside Higher Ed points out, there is no simple solution to the problem. Raising community college standards would be "irresponsible," notes the NCEE report, unless high schools make the changes necessary to meet them. The Common Core State Standards adopted by many states will help high schools meet the already low community college standards, notes the report, but cautions that implementation will be a "heavy lift" for schools.

The NCEE results were drawn from a two-year review of seven community colleges in seven states. Colleges hailed from rural, suburban and urban communities, with enrollments ranging from 3,000 to 30,000 students.

"High Schools Fail to Teach What Graduates Need to Succeed in Community Colleges, Instead Teaching What They Don't Need," ncee.org, May 7, 2013