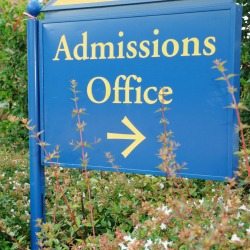 Elite U.S. colleges often go to great lengths to recruit financially disadvantaged students who demonstrate academic potential. In many cases, programs are in place to help reduce or eliminate tuition for these students, so one might expect competition to be steep. A new study by the National Bureau of Economic Research suggests otherwise, however. In fact, the study found that in most cases, these students do not even bother to apply.

Inside Higher Ed reports that the new study released Monday finds that the majority of low-income students with high academic ability neglect to apply to even one competitive college, despite that fact that aid programs at these institutions could minimize or eliminate their financial contributions. The results suggest that higher-caliber schools -- which increasingly aim to recruit and enroll economically disadvantaged students -- are missing the mark.

"We show that the vast majority of very high-achieving students who are low-income do not apply to any selective college or university," professors Caroline M. Hoxby of Stanford University and Christopher Avery of Harvard University write in the study. "This is despite the fact that selective institutions would often cost them less, owing to generous financial aid, than the resource-poor two-year and non-selective four-year institutions to which they actually apply."

According to Inside Higher Ed, Hoxby and Avery used College Board and ACT data to identify high-achieving students to monitor. In order to qualify for the study, students had to have an A- or higher grade point average, and had to come from families who earned a maximum of $41,472 per year. In the end, Hoxby and Avery found that about 53 percent of low-income, highly talented students who applied to at least one college failed to select an elite institution. Instead, many of the high school seniors in the study applied to either one nonselective college, or one nonselective college and one moderately selective college.

Hoxby presented her findings at a session of the College Board Forum in October, nearly two months before the publication of her paper, wrote The Chronicle of Higher Education. In that session, Hoxby suggested that students who "undermatch" during the college search usually apply to too few colleges, and often do not understand how much financial aid could benefit them. Such students rely upon local word of mouth to choose potential schools, and lack mentors and peer guidance that could notify them of educational opportunities. Inside Higher Ed reports that in those rare cases where low-income, high-potential students do apply to high caliber schools, they tend to come from high-achieving high schools where students have access to more academic resources, as well as guidance counselors, teachers, and fellow students who are more familiar with competitive colleges.

According to The Chronicle of Higher Education, Hoxby advises college counselors and admissions professionals to broaden their recruiting scope, inviting students from lower-income schools to join college information sessions held at higher-achieving high schools in their area. Hoxby also recommends that counselors provide those students with basic information about financial aid and application fee waiver programs.