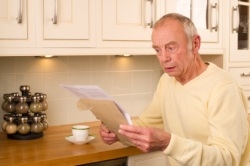 New research from the Federal Reserve Bank of New York indicates that Americans ages 60 and over owe $36 billion in student loans and comprise about 5 percent of delinquent student loans.

As reported by The Washington Post, there are several reasons for this disturbing trend: Some older Americans are still paying for their original student loans, while others have taken out more recent loans to pay for upgrading their job skills. Many have also co-signed loans to help pay for their children's and grandchildren's educations.

The problem is particularly pronounced because unlike other debt, student loans cannot be removed through bankruptcy. "A student loan can be a debt that's kind of like a ball and chain that you can drag to the grave," said William E. Brewer, president of the National Association of Consumer Bankruptcy Attorneys, who was quoted by the Post. "You can unhook it when they lay you in the coffin."

Actually, even the grave will not make all student loans disappear. According to an interview last year in the Florida Sun Sentinel with Mark Kantrowitz, publisher of FinAid.org, only federal loans are discharged after a borrower dies. Private student loans, by contrast, are charged against the borrower's estate.

According to the Post, consumer advocates have noted that "it is not uncommon for Social Security checks to be garnished or for debt collectors to harass borrowers in their 80s over student loans that are decades old."

Ylan Q. Mui, who wrote the article for the Post, noted in an interview with CNBC that the problem will likely worsen because of skyrocketing tuition costs. For this reason, she said, consumer advocates are calling student loans "the next potential debt bomb."

"This generation of graduates who are being saddled with all this debt may have to continue paying it off until they are paying for their kids go to college or even until they're facing retirement," she told CNBC.

While the amount of student debt owed by Americans ages 60 and over is significant, it still amounts to a small sliver of the approximately $870 billion owed in total student loans. Nearly 40 percent of that debt is shouldered by adults under age 30, and about 27 percent is owed by borrowers ages 30 to 39. Student loan debt has surpassed the total credit card balance ($693 billion) as well as the total auto loan balance ($730 billion).