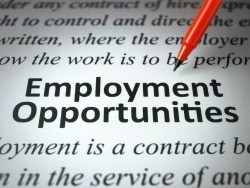 A new series of reports shows that the private sector added 192,000 jobs in March after the addition of 188,000 jobs in February. As Bloomberg reported, this recent surge in employment brings the total number of jobs to 116.1 million, slightly higher than the pre-recession peak of 116 million. Industries reportedly adding the most jobs include health care, retail, and building.

"As the speed of improvement in the labor market continues, all the things she's looking at are going to get better," Neil Dutta, head of U.S. economics at Renaissance Macro Research LLC said of Fed Chair Janet Yellen. "Economic conditions continue to improve."

Despite overall job growth last month, the March jobs report wasn't without its share of bad news. For example, the number of workers stuck in part-time status increased by 225,000 to a total of 7.4 million. This and other factors indicate that the economic recovery isn't being felt by all.

"The numbers of people who have been trying to find work for more than six months or more than a year are much higher today than they ever were since records began decades ago," Yellen said at a Chicago conference. "While there has been steady progress, there is also no doubt that the economy and the job market are not back to normal health."

Still, the economy has made some progress. As USA Today reported, the share of people either working or looking for work rose to 63.2 percent after a historical low of 62.8 percent in December 2013. The average workweek also rose to 34.5 hours from 34.3, potentially due to warmer weather and thus better conditions for certain types of work. Some economists, however, believe that factors such as higher interest rates and reduced production may be interfering with further economic growth.

A report in The Wall Street Journal recently questioned where all of the able-bodied workers have gone to and why only 63.2 percent of adults ages 16 and up are currently participating in the workforce. There are several plausible explanations to this question, including structural issues in the economy, cyclical trends with the labor force, and the continual loss of baby boomers to retirement. However realistic those explanations might seem, there are still some economists who continue to point to other factors that may be influencing the workforce.

For example, the newly enforced Affordable Care Act, commonly known as Obamacare, may be providing disincentives for work due to health insurance subsidies that taper off with higher earnings. Continued extensions of unemployment insurance may also be prolonging some workers' stint out of the workforce, noted the Wall Street Journal, not only by offering financial assistance that might discourage some from seeking employment but also by making the long-term unemployed seem less attractive to employers.

While these issues are sorted out, the Federal Reserve continues to use "quantitative easing" to lessen the effects of the most recent financial crisis and to keep interest rates low enough to spur economic development and luring people back into the labor force.