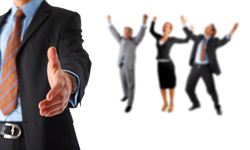 Nearly two years after the end of the recession, the Labor Department's March jobs report shows that improvements in the job market are finally starting to stick.

According to CNN Money, the economy added 216,000 jobs last month, which is far better than the 194,000 jobs added in February. Private businesses led the pack, adding 230,000 new jobs. This is higher than what ADP reported earlier this week. As NPR noted, this is the second straight month that private employers have added more than 200,000 jobs, which has not happened since 2006, before the start of the recession. Other sectors that had strong hiring included business and professional services (adding 78,000 jobs), health care and social services (44,000 jobs), and leisure and hospitality (37,000 jobs), reported CNN Money. Temporary workers also grew by nearly 30,000, which is a good indication that businesses are starting to consider permanent hires.

Such strong hiring has brought the unemployment rate down to its lowest level since March 2009--8.8 percent. Unemployment has dropped a full percentage point in the last four months, the sharpest drop since 1984.

Furthermore, the number of people who lost their jobs in March dropped by 125,000 and is now at the lowest level in two years.

For many, this month's jobs report offers a huge sigh of relief.

"The unemployment rate has broken through the sound barrier and is continuing to decline," said Sung Won Sohn, economics professor at Cal State Channel Islands. "The recovery in employment is here to stay."

However, others are less optimistic. While economists have been saying that at least 150,000 new jobs per month are needed in order to keep pace with population growth, they are now pointing out that some 300,000 new jobs each month are necessary to see a significant dent in the unemployment rate. Heidi Shierholz, an economist at the liberal Economic Policy Institute, told The New York Times that if the economy continues its trend of adding 200,000 jobs a month, the unemployment rate will not return to pre-Great Recession levels until 2019.

Moreover, despite all the good news, there are still 13.5 million people who are unemployed and 6.5 million who are not even counted in the labor force due to the fact that they have stopped looking for work, reported CNN Money. In fact, The New York Times noted that the labor force has shrunk down to just 64.2 percent, the lowest participation rate in 25 years. NPR reported that the average duration of unemployment is now at 39 weeks, which is the longest time on records that date back to 1948. As people start to return to the labor force, more jobs will need to be added in order to keep the unemployment rate from rising again.

According to The New York Times, economists are also concerned that international problems--high debt in Europe, uprisings in the Middle East, the aftermath of natural disasters in Japan--and the possible government shutdown in Washington will soon start to take their toll on the economy and possibly stifle consumer spending.

"The first half of this year will be the best job market that we'll see in this whole expansion," predicted David Levy of the Jerome Levy Forecasting Center. "We're riding the crest of earnings. But after that, and looking toward 2012, the situation is very questionable."