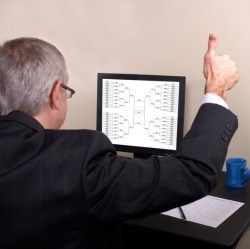 March Madness is in full tilt, which means office pools are likely are, too. While some workers stand to make money with their NCAA brackets, employers are bracing to lose some in lost productivity. According to at least one study, this may not be such a bad thing, and may even boost employee morale and engagement overall.

A recent study from the global outplacement firm Challenger, Gray & Christmas predicts companies overall will lose about $1.2 billion for each unproductive work hour spent on NCAA tournament-related activities, reports The Chicago Tribune. The analysis is based on a 2009 survey that suggested 50 million people participate in office pools each year coupled with a recent U.S. Bureau of Labor Statistics report suggesting a national average hourly wage of $24.31.

"The impact on productivity comes from several directions. You have employees talking about which teams made or didn't make the tournament. You have other workers setting up and managing office pools," John A. Challenger, the firm's chief executive officer, said in a statement acquired by the Tribune.. "Of course, there are the office pool participants, some of whom might take five minutes to fill out a bracket, while others spend several hours researching teams, analyzing statistics and completing multiple brackets."

Lost productivity is one possible impact the NCAA tournament may have on the American workplace, but it is not the only concern. According to The Washington Post, employees streaming games from their computers or checking their brackets frequently could overwhelm company networks and reduce Internet speeds.

Given the report, one might expect Challenger and company to advocate employer bans on office pools and workplace viewing. On the contrary, reports The Los Angeles Times -- the firm actually advises companies to embrace March Madness, by, for example, catering lunches and setting up televisions in break rooms. It recommends also temporarily relaxing office dress codes so that employees can support their favorite teams. These activities boost employee morale, notes Challenger, which offers its own economic rewards.

"It is unlikely that a few days of March Madness distraction will impact the company's bottom line," Challenger told The Los Angeles Times. "Taking a hard line on office pools and online streaming, on the other hand, could have a dramatic impact on the bottom line if it leads to increased turnover or causes employees to become disengaged, which will only lower both the quantity and quality of work output."

As for office managers, they largely view the NCAA tournament in a neutral or even positive light. The Washington Post reports that a recent survey of 300 senior leaders by the staffing service OfficeTeam found that only 11 percent of managers think March Madness has a negative impact on productivity; 27 percent said it has a positive impact while the remaining 62 percent believe it has no impact at all. About a third of respondents said they believe office pools and other events actually boosted workplace morale, motivating some employers to embrace the tournaments by staging company-wide events.