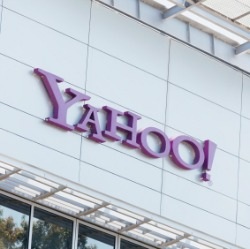 One year ago, Yahoo announced then-pregnant former Google executive Marissa Mayer would be its next CEO. The appointment generated a lot of media buzz about what her advancement might mean for working mothers, modern feminism, and, of course, the struggling major tech corporation she would now lead. Now, a year later, Mayer is getting a very public, if unofficial performance review -- and the news is (mostly) good.

The Washington Post reports that on Thursday, the jobs and employer rating site Glassdoor published its take on Mayer's first-year approval ratings, which was drawn from 179 Yahoo! employees' reviews. Overall, Mayer was given an 85 percent cumulative CEO approval rating. Overall job satisfaction under her leadership is rated 3.7, on a scale of one to five. Both Mayer's overall approval scores and employee satisfaction ratings are higher than those of her predecessors -- Scott Thompson and Carol Bartz -- during their final quarters leading the company.

"Things were kind of stagnant under Bartz and Thompson," one Yahoo senior software engineer wrote in his Glassdoor review, as reported by Mashable. "Marissa Mayer has really stepped up to make life better for the employees and get rid of soul-crushing dysfunction."

According to Mashable, other employee reviews praised Mayer for bringing a "sense of vision and urgency" to the company, as well as adding more "employee friendly benefits," like free food and generous new maternity and paternity policies.

Not every review gives Mayer high marks, however, and according to Bloomberg, her approval rating at the end of her first year is down six points from what it was at the beginning of her tenure, which could suggest that the enthusiasm surrounding her hiring has cooled. The Washington Post reports that her approval rating is also lower than some other major Silicon Valley CEOs. Both Google's Larry Page and Facebook's Mark Zuckerberg have Glassdoor approval ratings above 90 percent.

Mashable reports that Yahoo! employees who were more critical of Mayer often cited her controversial policy shift that required telecommuters to report to the office, and the company's infamously long hiring process. According to Bloomberg, a year before Mayer's arrival, Yahoo's average hiring approval process took eight days. Now, under her leadership, it takes an average of 22 days.

Still, other indicators suggest Mayer's first year has been a success. According to The Washington Post, she has overseen a number of high-profile acquisitions, improved profits and what has been called a steady rebound.