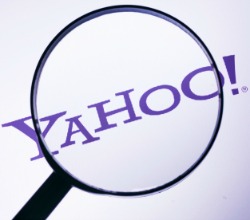 When a company's chief executive announces a shift in company policy, it is usually more likely to generate buzz in the employee break room than in the national media. That is, of course, unless that company is Yahoo and that CEO is Marissa Mayer, who finds herself at the center of a national debate this week on the perks and pitfalls of flexible work-from-home policies.

The Wall Street Journal reports that Yahoo Chief Executive Marissa Mayer has decided to move all home-based employees back into Yahoo offices. Yahoo currently employs several hundreds of people who work from home full time, as well as many more who telecommute a few days a week. The policy was announced through a company-wide email from HR head Jackie Reses, who suggested that the move could improve efficiency.

"Speed and quality are often sacrificed when we work from home," wrote Reses in the memo, which was published in full by The Atlantic. "We need to be one Yahoo!, and that starts with physically being together."

According to Business Insider, reactions to the news among Yahoo employees ranged from angry to wholly supportive. Some working mothers assert that they wish they could afford a nursery at the office akin to the one Mayer has. Other employees say Mayer made the right call.

"For what it's worth, I support the no working from home rule," a former Yahoo engineer told Business Insider. "There's a ton of abuse of that at Yahoo. Something specific to the company."

The Wall Street Journal reports that the announcement has drawn attention to some of the downsides of employees working remotely, such as communication gaps, less trust among teams and, for workers, a somewhat fuzzy boundary between work and home.

On the other hand, telecommuting advocates -- outraged by Mayer's decision -- contend that new mobile and communication tools make it possible for workers to effectively do their jobs virtually anywhere. In his op-ed for The Atlantic, senior editor Derek Thompson explained that research into the field of home-based work and productivity almost exclusively supports the idea that employees who are able to telecommute are more productive. One such study conducted by Cisco found that the company actually saved $277 million each year by allowing employees to work from home. Similarly, a survey of work-from-home studies published by California State Polytechnic University said that it was difficult to find research that indicates telecommuting produces any productivity gains lower than 10 percent.

There are reasonable arugments for "building a dense and collaborative workplace culture," writes Thompson, but they may come at a price. "Mayer might be alienating the most brilliantly independent-minded employees just because they value flexibility and Yahoo doesn't."