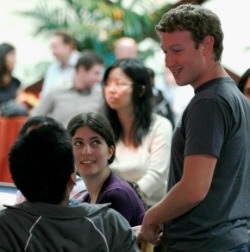 As founder and CEO of the social media giant Facebook, Mark Zuckerberg has made a name for himself as a high-tech superstar, earned a fortune and even inspired a blockbuster movie. Now he is teaming up with some of the tech industry's most respected minds to launch his next big venture: Politics.

TechCrunch reports that Zuckerberg and fellow tech leaders from the likes of Google, Dropbox and others are joining forces to found a bipartisan political advocacy group called FWD.us, pronounced "Forward U.S." The group's goal is to promote policies that keep the national workforce competitive, beginning with comprehensive immigration reform. It will also support education reform and scientific research.

Rumors of the venture -- and Zuckerberg's involvement -- began to circulate two weeks ago but were confirmed when the Facebook chief published an op-ed in The Washington Post announcing the initiative and clarifying its goals. In it, Zuckerberg suggests that today's economy is driven by ideas, not finite resources, and that in order for the nation to succeed, it must embrace policies that attract top innovators from all across the globe.

"In a knowledge economy, the most important resources are the talented people we educate and attract to our country," writes Zuckerberg. "A knowledge economy can scale further, create better jobs and provide a higher quality of living for everyone in our nation." Zuckerberg suggests that the first step toward growing the economy is to enact comprehensive immigration reform that "allows a path to citizenship" and "(attracts) the most talented and hardest-working people, no matter where they were born." He notes that his own great-grandparents immigrated to the United States through Ellis Island, and that those who have entered the country since and worked hard should be allowed to stay and contribute to its economy. "This is, after all, the American story."

Zuckerberg's op-ed says that in addition to immigration reform, FWD.us will promote education policies that increase school standards and accountability, support good teachers, and emphasize science, technology, engineering, and math. He says the country must also invest more in scientific research while providing assurance that the benefits of innovation "belong to the public and not just to the few."

The Wall Street Journal reports that Zuckerberg is just one of an elite group of tech leaders who will head FWD.us. The initiative also has more than 20 major supporters, including Eric Schmidt, chairman of Google Inc., Mark Pincus, CEO of Zynga Inc., and Marissa Mayer, CEO of Yahoo Inc. Efforts will be split between its Silicon Valley and Washington, D.C., offices, and led by campaign manager Rob Jesmer, a former executive director of the National Republican Senatorial Committee.

Jesmer told TechCrunch that FWD.us will begin its work immediately with the Senate Judiciary Committee's hearing on immigration reform on April 17. The group is also expected to support the Gang Of Eight legislation, which includes a pathway to citizenship, tougher border security, and guest worker programs for low- and high-skilled talent.