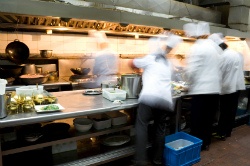 Social media sites have become the preferred tool when it comes to searching for and researching candidates. However, some companies are now using such sites in a very different way. The Wall Street Journal reported that Marriott International Inc. created a hotel-themed online game that the company hopes will inspire people to pursue a career in the hotel industry.

The game, called "My Marriott Hotel", will be launched on the company's Facebook page. According to UpTake, players will be able to run the hotel's kitchen--they can hire staff, buy ingredients and oversee food orders from the restaurant. Gamers earn points for happy customers, but lose points for poor service.

The Wall Street Journal reported that Marriott's service-industry simulation game--or time-management game--is meant to not only be fun but also to attract prospective employees. David Rodriguez, executive vice president for global human resources at Marriott, said he hopes that the game will spark people's interests in the hospitality industry.

"You get to see what kinds of decisions people have to make when they're running the hotel," he said.

The concept of using computer games for recruiting started nearly 10 years ago when the U.S. military introduced America's Army, a video game that simulated everything from the barracks to the battlefields to attract new army recruits. There are now a number of mobile games available that depict various service industries, such as a diner or nail salon.

UpTake noted that the Hilton Garden Inn launched a first person PSP game called "HGI Ultimate Team Play" in 2009 to train employees. The game showed hotel workers how their actions could affect a guest's mood and, therefore, the hotel's brand and business.

Susan Strayer, a human-resources branding expert at Marriott, told The Wall Street Journal that My Marriott Hotel is purely a marketing tool and although it is realistic, it will not be used to evaluate applicants' skills. According to a press release, the company recently announced it was planning to open 49 new hotels and resorts around the world in the next four years. Locations include the Asia/Pacific region, the Middle East/Africa, Europe and the Americas. The Wall Street Journal noted that this equates to approximately 50,000 new positions this year and some of the locations, such as India and China, do not have strong hospitality-industry traditions.

Marriott plans to roll out later versions of the game that will depict other aspects of the hotel industry as well as introduce a mobile phone version next year.