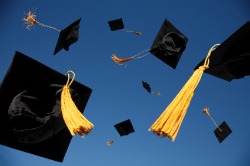 Undocumented immigrants residing in Maryland moved one step closer to receiving in-state tuition benefits at Maryland public colleges, thanks to a 27 to 20 approval of the controversialDream Act by the Maryland Senate. The bill, passed on Monday, now goes to the House of Delegates for further debate.

The bill allows illegal immigrants to pay in-state tuition rates at community colleges, which is currently much lower than out-of-state tuition. Students who complete their associate'sdegree would then be eligible to transfer to a four year institution with the same discount. Those who attend community college could save between $4,000 and $6,000 per year, while thosewho move on to four-year institutions could save much more. The Baltimore Sun puts thedifference in cost in perspective: In-state tuition at the University of Maryland College Park campus is $8,655 this year, while out-of-state tuition is $25,795.

According to The Washington Post, the bill passed this week is awatered-down version of the original bill which called for tax breaks for any student who attended at least two years at a Maryland high school and whose parents paid taxes, regardless oftheir immigration status. The compromise offers the bill a better chance of passing both the Senate and the House, but some feel it will be shelved at the next round of voting.

Most Republicans voted against the measure, saying it sends the wrong message. According to WAMU 88.5 FM,Senator Bryan Simonaire (R) of Anne Arundel calls the measure unfair. "It's unfair to those who played by the rules, it's fiscally ill-timed and imprudent and it directly rewards those whohave unashamedly broken our laws," he said.

The sponsor of the bill, Senator Victor Ramirez (D), expressed pride in the students who pushed for the measure. "I'm very proud of them because they haven't given up. They're veryresilient, and I know they're gonna do great things--that's what the American dream is about," he said.

According to The Retriever Weekly, two dozen potential amendments to the law were dismissed during debate,including a proposal to allow counties or colleges to opt out of the tuition decrease. Much of the concern over the bill centered on the cost; Maryland faces a $1.6 billion deficit thisyear, and the bill is expected to cost $800,000 next year. However, the total cost could grow to $3.5 million by 2016.

If the Dream Act is signed into law, Maryland will join ten other states that allow in-state tuition for illegal immigrants. Though a similar measure in 2003 was passed by the GeneralAssembly but vetoed by then-governor Robert Ehrlich, current governor Martin O'Malley has said he will sign the bill into law if it lands on his desk.