Massive Open Online Courses: Popular But Not Quite Profitable 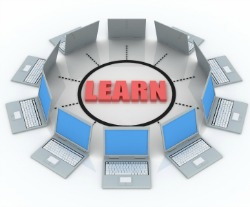 Massive open online courses, or MOOCs, are a growing phenomenon as providers such as Coursera, co-founded by Stanford University computer science professors, and competitor edX, created by the Massachusetts Institute of Technology and Harvard University, continue to add more students and participating institutions to their ranks. But a new survey published Wednesday suggests that despite their growth, not all colleges are keen to join the MOOC revolution. The issue? It could be a while before anyone begins seeing any revenue.

Bloomberg reports that a new survey released by Babson College in Wellesley, Massachusetts, finds that only 2.6 percent of U.S. colleges and universities offer MOOCs, with an additional 9.4 percent intending to add them in the future. Although well-known institutions including Harvard University, Stanford University and MIT are among the institutions offering these free, not-for-credit courses online, the Babson report suggests that many academics greet the trend with skepticism, especially in terms of profitability.

According to The New York Times, groups such as Coursera and edX attracted attention and a lot of venture capital -- $22 million and $60 million, respectively -- but none of these programs have yet found a way to earn money through their no-cost course offerings.

"No one's got the model that's going to work yet," James Grimmelmann, a New York Law School professor who specializes in computer and Internet law, told The New York Times. "I expect all the current ventures to fail, because the expectations are too high."

But Coursera financier and general partner at New Enterprise Associates Scott Sandell told The Times that profits are not the primary goal of MOOCs, at least in the beginning.

"What is important is that Coursera is rapidly accumulating a body of high-quality content that could be very attractive to universities that want to license it for their own use," said Sandell. "We invest with a very long mind-set, and the gestation period of the very best companies is at least 10 years."

Bloomberg notes that while some experts remain reserved about the potential of online education, more students than ever are logging on to the trend: The Babson survey found that about 6.7 million students took at least one online course during the fall 2011 term, which is a 9 percent increase over the previous year and over four times the number in 2002. All in all, about one-third of college students take at least one course online.

"A year ago, I could not have imagined that we would be where we are now," Coursera co-founder Daphne Koller told The New York Times. "Who knows where we'll be in five more years?"

The Babson survey was sponsored by the nonprofit Sloan Consortium and conducted with help from the New York-based College Board. A total of 2,800 colleges participated.

"Students Rush to Web Classes, but Profits May Be Much Later," nytimes.com, January 6, 2013, Tamar Lewin