Math And Science Teachers In Washington Paid Less Than Other Teachers 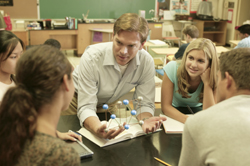 House Bill 2621 was passed unanimously in March 2010. The law intended to improve teaching and learning of science, technology, engineering and mathematics (STEM). However, an analysis from the University of Washington's Center on Reinventing Public Education (CRPE) revealed that Washington State may be doing just the opposite as the average pay for math and science teachers in high schools is less than the average pay for teachers in other subjects.

According to a press release from CRPE, Washington State personnel data as never identified teachers or teaching assignments by subjects until now. Researchers Jim Simpkins, Marguerite Roza and Cristina Sepe analyzed data from Washington's 30 largest school districts, which included 7,151 teachers (1,792 of whom teach either math or science or both) in 122 high schools.

The News Tribune reported that science teachers are paid about 2.9 percent less than other teachers. Among math teachers, the difference was slightly higher--these teachers earned 4.5 percent less than others. "At a time when public rhetoric espouses prioritizing STEM subjects, the current salary schedule works to do the opposite," said the authors of the study.

This difference in pay is due to the fact that Washington's salary schedule rewards longevity and credentials, stated Education Week. Compared to other teachers in the study, math and science teachers had a high rate of turnover (25 out of the 30 districts analyzed experienced higher turnover), which results in a less experienced group of educators. One reason for high turnover may be because of the pay difference; however, it was also hypothesized that teachers with math and science skills have more opportunities to advance--and better pay--outside of education and, thus, leave after only a few years of teaching.

Many worry that the disparity in salaries between STEM teachers and other educators will cause the state to fall behind in these critical subjects. Indeed, in 2009, only 45 percent of Washington high school students passed the tenth grade math skills exam and just 39 percent passed the science skills exam, reported CRPE in its press release.

Some have argued to overthrow the uneven wage system and allow for differential compensation based on more factors. However, this can be problematic. The News Tribune pointed out that some parents and teachers believed that differential pay would imply that some subjects are more important than others. According to the study, teacher unions argued that "differential pay could demean some teachers...All subjects, whether they be art, social studies or music, are deemed important. But when others are paid more, what happens to collegiality?"

Researchers concluded that "despite its earnest commitment to high school math and science teaching, [Washington State] ends up spending less per teacher in the two subject areas it wants to emphasize". However, whether or not this is fair is open to debate. As the authors of the study pointed out, fairness for some may be a commitment to longevity and credentials, whereas others see fairness as dependent on labor market value.