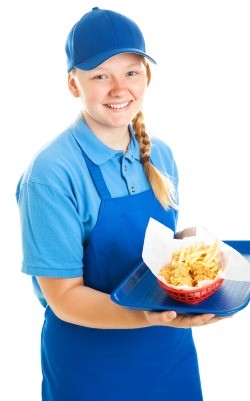 McDonald's has collaborated with Visa to develop a Practical Money Skills Budget Journal for its low-wage workers. While the guide is intended to be a money management resource for McDonald's employees, it has become the subject of mockery and criticism, as it reveals just how difficult surviving on a minimum wage can be.

According to ThinkProgress, the guide targets employees with an average wage of $8.25 per hour. Much of the sample budget has been highlighted as unrealistic. For example, only $600 is allocated for monthly rent and $20 for health insurance. ThinkProgress noted that these costs can be much higher, especially for those who live in a city and/or are uninsured. The budget also allocates no monthly spending for food or clothing and originally noted a $0 heating expense, which has since been modified to $50 a month.

A key aspect of the budget is a two-job income, as one income alone is not enough to cover the stated monthly expenses. CNBC explained that given the stated incomes for first and second jobs, the average low-wage employee would have to either work over 60 hours per week earning the minimum wage or earn over $12 an hour in a 40-hour work week.

As noted by ThinkProgress, part of the budget site mentions to readers, "You can have almost anything you want as long as you plan ahead and save for it." Not everyone, however, believes that the budget actually reflects that statement.

Teo Reyes, program director of Restaurant Opportunities Centers United, commented on the sample budget to CNBC: "It doesn't speak to the realities of low-wage workers in the food industry…I think it would be commendable if it was also part of a movement to increase wages. At this point i[t] seems to be disingenuous and insulting."

McDonald's USA defended the budget, asserting that "[t]he samples that are on this site are generic examples and are intended to help provide a general outline of what an individual budget may look like."

Alice Wood, founder of Wealth Watchers International -- the organization that created the budget journal, explained how the figures in the sample budget were devised: "In one of our generic budgeting samples that was created in 2008 we used actual information that was gathered from interviews with a number of minimum wage employees. The line used for income from a second job can mean the person was working two jobs, or there may have been another person in the household bringing in a second income. The figures used were after all withholdings including taxes and health insurance premiums." She further commented that heating was initially included in rent.

According to Wood, the sample budget is not meant to be an accurate reflection of all minimum-wage workers' financial situations, as every employee is different. "Some live at home and have no expenses. They are simply working for spending money. Others work a minimum wage job to supplement their family's income. And some employees actually do work two minimum wage jobs to support themselves. We also found that many young people do have roommates and have shared living expenses."

The Washington Post also defended the sample budget, stating that it is, for the most part, a realistic reflection of the average low-income American's spending activity. Rent, for example, can amount to less than $600 for those sharing an apartment, depending on where they live. The given utilities costs, aside from heating, are also around national averages. Electricity, for example, was budgeted for $90 per month, compared to the $103 national average. Additionally, while food and clothing may not be overtly stated, they are included in the monthly spending money, which should be more than enough to cover these items, if statistical cost averages are considered. The author did acknowledge, however, that $20 a month for health insurance and the original $0 per month for heating are not realistic estimates.

Wood emphasized to CNBC that the journal is meant to be a budgeting tool for workers to assess their individual financial condition: "Everyone can benefit from having a handle on their finances and that includes knowing what's coming in and what's going out."

"McDonalds Tells Workers To Budget By Getting A Second Job And Turning Off Their Heat," thinkprogress.org, July 15, 2013, Annie-Rose Strasser