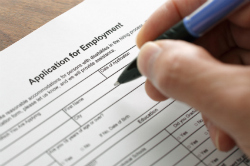 For the first time ever, the popular fast-food chain McDonald's will sponser a "National Hiring Day" on Tuesday April 19, repoted Forbes. Starting tomorrow, between the hours of 7 a.m. and 5 p.m., the restaurant will be taking online and in-person applications for 50,000 open positions across the country.

According to CNN Money, the hiring spree will occur at all 14,000 McDonald's locations nationwide and positions will include part-time and full-time crew and management roles.

"We're excited to offer 50,000 new jobs, all across America, all in one day," said Jan Fields, president of McDonald's U.S.A.

Reuters reported that while the staff increases are no different from prior years, this is the first time that all hiring will be done in just one day. Once all positions are filled, the restaurant's workforce will have increased 7.7 percent to 700,000.

Forbes praised McDonald's for its marketing plan, arguing that the company is not only creating a positive image for itself, but it is also sparking hope, excitement and encouragement during tough economic times. Given the still high unemployment rate, Forbes predicted that tomorrow's applicants will most likely be higher quality than in the past.

The average pay for the jobs is $8.30 an hour, noted CNN Money, which is slightly higher than the federal minimum wage of $7.25 an hour. According to Reuters, this comes out to a bit more than $16,600 a year for a person working full-time. Although this is higher than the federal poverty cut-off line, which is $10,890, it is only slightly more relief than unemployment benefits.

One Illinois-based McDonald's said in a statement that tomorrow's hiring event is an opportunity to prove that "a McJob is one with career growth and endless possibilities". Reuters pointed out that McDonald's executives and franchisees worked their way up within the company. Furthermore, Fields told CNN Money that restaurant managers can earn $50,000 a year.