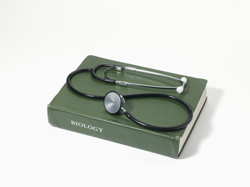 The School of Medicine at Stanford University is joining the long list of colleges that will be offering incoming freshmen an iPad this fall, reported Apple Insider. Master of Medicine students will also be receiving an iPad later this month.

The school noted that they were excited about the iPad's flexibility, saying that the "iPad allows students to view and annotate course content electronically, facilitating advance preparation as well as in-class note-taking in a highly portable, sharable and searchable format". Because of its portability, SF Gate added, Stanford medical school officials believe the device will improve students' learning experiences. "Part of the challenge facing medical students, and all doctors, is the overwhelming amount of information," said Dr. Charles Prober, senior associate dean for medical student education and professor of pediatrics, microbiology and immunology.

With the iPad, med students will be able to not only store digital textbooks, syllabi and journal articles, but they can also take all that information with them wherever they go. "When students get into clinical experiences and have a vague recollection of something they heard during class, it will be easy for them to go back and remind themselves what that was, and [they] can recall prior knowledge instead of going home searching through their syllabi," said Prober to The Stanford Daily.

Apple Insider reported that the transition to iPads also reflects a commitment towards the Sustainable Stanford initiative, which aims to make every aspect of campus life more environmentally friendly. "The number of pages that get printed are astronomical, so we will be able to save trees," Prober told The Stanford Daily.

According to SF Gate, school officials are hoping that the iPad will be more cost efficient for students. Medical textbooks can run as high as $200 per paper edition, whereas e-books are slightly less.

Although students and faculty are excited about the trial program, Prober told The Stanford Daily that there may be some students who either prefer traditional teaching methods or are not familiar with technological devices. He did add, however, that he "can't imagine too many students like that".

Students will start receiving their iPads during orientation from August 18 to 20. SF Gate reported that school officials will conduct regular surveys to monitor how useful the devices are. Based on feedback from this trial program, Stanford will then determine whether it should continue to provide iPads to future medical students.