Men'S Gymnastics Reinstated As An Intercollegiate Sport At UC Berkeley 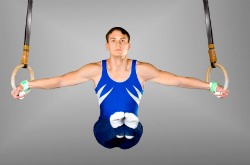 A little more than seven months after deciding to eliminate four intercollegiate sports programs and demote one, the University of California Berkeley announced that all five programs will remain intact.

According to the UC Berkeley News Center, students, family members and gymnastics supporters raised $2.5 million to preserve men's gymnastics as an intercollegiate sport. Although short of the $4 million officials said was needed to fund the team's current costs, it--in combination with continued efforts to reduce operating expenses--will be enough to support the program for seven to 10 years. Officials said they did not want to delay making the announcement so that current student-athletes could make decisions about their futures and the coaching staff could continue recruiting for the 2011-12 year, which starts at the end of the week.

"We recognize the importance of providing stability for men's gymnastics at this important juncture and are reinstating the program under the conditions that are supported by current financial resources," said Chancellor Robert Birgeneau.

The Oakland Tribune reported that Chancellor Birgeneau reinstated the program on a non-scholarship basis until additional private funding meets the $4 million target.

As noted by the UC Berkeley News Center, scholarships will continue to be offered at present levels for returning student-athletes only. Scholarships for new recruits, however, will be restricted. As additional money is raised, scholarship aid will incrementally increase.

Although disappointed that incoming gymnasts will not receive scholarship aid, as this is an important element to sustain the program, students and supporters were still thrilled by the news.

"I'm kind of glad it was over the phone because I probably had the silliest grin on my face, but it was uncontrollable," said McNeill to the Oakland Tribune. "It was the best news I may have heard in my life."

Supporters are confident that they will be able to meet the target amount. Fundraiser Neil Popovic told SFGate that philanthropist Doug Goldman offered to pledge $160,000 if four other donors match his amount.

According to the UC Berkeley News Center, donors have pledged more than $20 million to preserve Cal's baseball, men's gymnastics, women's gymnastics, women's lacrosse and rugby teams. The donations, in combination with ongoing fundraising, are expected to support the costs of each team and still meet the university's goal of capping institutional support for athletics at $5 million annually by 2014.