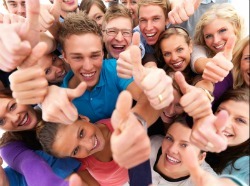 Young people like their employers more than their older co-workers do, but are more apt to leave their current job for a new one, a recent study called "What's Working?" showed.

"Twenty-somethings may see a job in a 'short-term, transactional way,'" Bruce Tulgan, founder of Rainmaker Thinking Inc., a workplace consulting company, told The Wall Street Journal. "They don't necessarily think 'Where do I fit in with this employer?'"

Those findings create a challenge for employers.

In its survey, the consulting firm Mercer asked approximately 30,000 workers in numerous industries worldwide--including more than 2,400 workers in the U.S.--about their attitudes toward their employers. Young people were categorized as those under age 34 for the study.

BNET reported that young workers may move from employer to employer to acquire skills, move up the career ladder or garner a greater salary. Additionally, this group tends to be more flighty and willing to take the risk because, generally, they don't have the responsibilities of children and a mortgage.

Consequently, noted the press release, this presents a problem for employers.

"Do they simply accept that young talent is going to leave no matter what the organization has to offer, or do they invest time and resources in an attempt to change the views and employment habits of their younger workers?" asked Colleen O'Neill, North American leader for talent management consulting at Mercer.

To tackle the issue, companies first must understand their value proposition, O'Neill added. Then they must take appropriate steps to ensure that young workers want to stay.

Some companies already try to stave off boredom and retain its young staffers, noted The Wall Street Journal. International Business Machines Corp., for example, rotates young employees through training programs to expose them to various job duties, co-workers and locations. MasterCard Inc. has a Young Professionals network which does focus groups on topics such as social media initiatives, digital strategies and mobile payment technologies. It also offers lunchtime chats and blogging opportunities to get employees in varying departments and of different ages to interact, ultimately making them feel more engaged.

"Young Workers Worldwide Are More Satisfied with Their Employers Than the Overall Workforce, Yet Are More Likely to Be Thinking about Leaving, Mercer's What's Working Research Finds," businesswire.com, October 11, 2011