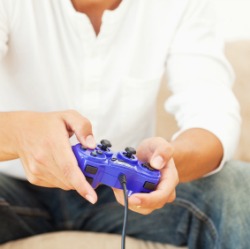 Video games have long been criticized for their negative effects. A recent meta-analysis of past research, however, suggests that video games -- even violent shooter games -- may have some cognitive, physical, and emotional benefits.

According to a press release, the study, which was published by the American Psychological Association, found that playing video games may boost learning, health and social skills among children and adolescents. Even violent shooter games, which are often criticized for promoting violence and aggression, were found to strengthen cognitive skills such as spatial navigation. In fact, the analysis showed that playing shooter video games improved a player's three-dimensional thinking just as well as an academic course on the same skills.

The study found that playing other types of video games correlated with certain benefits. For example, playing strategic role-playing games could help children develop problem-solving skills. Simple games, such as puzzle games or "Angry Birds", could improve a player's mood as well as promote relaxation and decrease anxiety. Multiplayer games, which many have said isolate players, may encourage cooperation as these games often require players to participate in social communities and/or lead a group.

Education Week was skeptical of the findings and argued that the analysis shows simple correlations or associations and do not necessarily prove anything. Still, the press release noted that many educators are starting to redesign their curriculum and teaching methods to incorporate video games. Though the analysis seemed to focus on children and adolescents, many professors have found video games to be a useful teaching tool for young adults. Dr. Benjamin Balak, associate professor of economics at Rollins College, told CityTownInfo that he uses video games, such as Civilization and World of Warcraft, to teach economics and economic-history. Dr. Balak has taken this idea one step further and is currently experimenting with gamification -- when an entire course is structured like a game -- in his economic courses.

When asked about his use of video games as a teaching tool, Dr. Balak explained to CityTownInfo, "I've had students play these highly complex games and then do comparative analysis between the games and the real world. I have had remarkable results with this and am happy to see many teachers joining this movement in education."

Dr. Balak explained that he started using Civilization to teach economics after doing research on pedagogy to develop his own teaching methodology. It was at this time that he realized that game developers, not educators, were employing some of the best teaching practices and insights.

In a written paper, Dr. Balak noted that social studies has never been a favorite subject for most students, which makes the topic of economics dismal as well. However, he also pointed out that students often spend hours playing games that demonstrate the exact same concepts, approaches and facts of social studies classes. Over the fall of 2005, Dr. Balak began using Civilization in his Economic History of Conflict classes. He found that using the game as a teaching tool not only increased students' enthusiasm for history, but also helped students develop a deeper familiarity with economic concepts.

"This is a 'new-old' approach that seems to be especially effective at employing the best old-school pedagogical practices in a new technological context," said Dr. Balak to CityTownInfo.