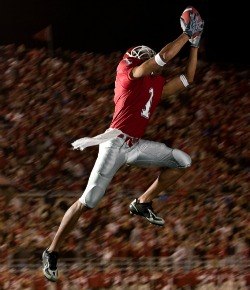 University of Missouri defensive lineman Michael Sam has quite a resume: He helped lead his team through a successful season, including a Cotton Bowl win, earning him the title of SEC Defensive Player of the Year. If the upcoming National Football League draft goes well for him, he can assume a new title -- first openly gay player in the league. Sam's focus is not necessarily on blazing new trails for future gay players entering what some consider to be a fairly homophobic industry. According to Sports Illustrated, he is in it for the football.

Michael Sam made headlines last week when he came out as the first openly gay NFL draft hopeful, and, perhaps, the first to play in the league. The NFL has earned a reputation for homophobia, reports The New York Times, but that label is often ascribed to most major sports leagues: Not a single openly gay player has ever played for the NFL, NBA, NHL or Major League Baseball. Sam opened up to his team first, but to his surprise, they already knew -- and had already accepted him.

"I looked in their eyes, and they just started shaking their heads -- like, finally, he came out," Sam told The New York Times. The University of Missouri released a statement of support soon after.

Wade Davis, a former NFL player who came out nine years after his 2003 retirement, had an opportunity to meet Sam on the eve of his announcement. In a column he penned for Sports Illustrated, Wade notes Sam chose to come out because he wanted a chance to tell his own story. Sam told him reporters at the Super Bowl knew he was gay and tried to snag the opportunity to break the story in the national news. Sam said fear of being outed before he got his say was a major factor in his decision to open up.

Reactions to the news were mixed. Sam's teammates and college have all been supportive, and Wade titled him "the bravest of all." On the other hand, reports The Boston Herald, anonymous quotes from NFL team managers have begun to circulate, questioning Sam's fitness to play, criticizing attributes such as his stature and other qualifications. These anonymous naysayers have not necessarily linked their hesitation to his sexuality, but the Herald suggests that the motivations behind their criticisms are suspicious.

If NFL higher-ups are less than forthcoming about their hesitations as they relate to Sam's sexuality, players -- including New Orleans Saints linebacker Jonathan Vilma -- are more direct.

"I think that he would not be accepted as much as we think he would be accepted,'' Vilma said in a locker room interview, as reported by the Herald. "I don't want people to just naturally assume, like, 'Oh, we're all homophobic.' That's really not the case. Imagine if he's the guy next to me and, you know, I get dressed, naked, taking a shower, the whole nine, and it just so happens he looks at me. How am I supposed to respond?"

Wade writes that in the time he spent with Sam, the young player never seemed like he was looking for publicity, positive or negative. He just wanted to be himself -- a stellar football player who happens to be gay.

"I wondered if he truly grasped the significance of this moment that would change lives for gay men and women in sports going forward," wrote Wade. "Then I decided that it doesn't really matter if he does. He's here to play football."