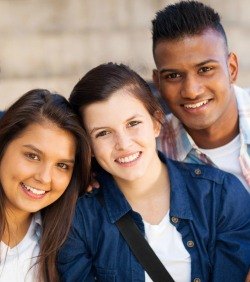 On Tuesday, First Lady Michelle Obama spoke to the sophomore class of Washington, D.C.'s Bell Multicultural High School about her experiences with and the importance of higher education, ABC News reported.

The First Lady, a graduate of Princeton University and Harvard Law school, discussed the struggles she faced in getting to where she is today. She rode the city bus for an hour each way to get to her high school. In hopes of attending Princeton, Obama studied hard throughout high school, assumed leadership roles, and developed close relationships with teachers and administrators. While recounting her own experiences, Michelle emphasized the importance of education in creating a better future both for the students themselves and, ultimately, for the country.

Attaining some amount of higher education is becoming more and more important to thrive in America. By 2020, almost two-thirds of jobs in the U.S. will require at least some training after high school. Moreover, due to the lack of sufficient college grads, three million jobs today remained unfilled because not enough applicants are adequately qualified.

Obama's talk was part of her husband's "North Star" Goal -- an initiative that states that by 2020, the United States will have the highest proportion of college graduates in the world. America has dropped from first to 12th place in this regard. Today, roughly 40 percent of Americans are earning college degrees and advanced certificates. That figure would have to rise to 60 percent in order for the U.S. to reclaim its position as the most college-educated nation.

Obama shared her own story about the struggles she endured in working towards her dream. The Washington Post quoted her saying, "I knew I couldn't afford to go on a bunch of college visits. I couldn't hire a personal tutor. I couldn't enroll in SAT prep classes. We didn't have the money." Finances weren't the only obstacle standing in her way. The First Lady recalled that she didn't always have support from her teachers; in fact, some of her teachers told her that she was "setting [her] sights too high" and that she would never be admitted to a school such as Princeton. "Nobody was going to take my hand and lead me to where I needed to go. Instead, it was going to be up to me to reach my goal. I would have to chart my own course," ABC News quoted her as saying. However, she didn't let that negativity get to her. Instead, she stated, "when I encountered doubters, when people told me I wasn't going to cut it, I didn't let that stop me -- in fact, I did the opposite. I used that negativity to fuel me, to keep me going. And at the end, I got into Princeton, and that was one of the proudest days of my life."

Though her dream to attend Princeton had come true, the hard work didn't stop there. As mentioned in The Washington Post, she told students that for her, coming to Princeton was like "landing on another planet. But through it all, I kept that college diploma as my North Star. And four years later, I reached that goal, and then I went on to build a life I never could have imagined for myself."

According to MSNBC, Obama admitted that everyone's experience will not be like hers, "but so many of the challenges and triumphs will be just the same." Like Obama, many of Bell's students are from a working-class home and experience the hardships that come with it. About 85 percent of Bell students qualify for a reduced-price or free lunch, a general indicator of poverty. Obama's story aimed to motivate students into turning their hardships into strengths: "Maybe you come from a rough neighborhood," she said. "Maybe one of your parents lost a job and you had to struggle just to get here today. These experiences are not weaknesses. They can teach you all kinds of things you can never learn in a classroom."