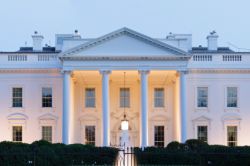 While President Barack Obama met with Chinese leader Hu Jintao at the White House, first lady Michelle Obama took the opportunity to encourage students to study abroad in China, in hopes of strengthening ties with the economic powerhouse and fostering cross-cultural exchange.

Speaking to students at Howard University in Washington D.C., Mrs. Obama endorsed President Obama's 100,000 Strong Initiative, a program aimed at increasing the number and diversity of students who travel and study in China, the International Business Times reported. Mrs. Obama said that investing time in China would not only make students more competitive in the global economy but also would lead to deep cultural relationships with their peers in China, creating mutual understanding around the world.

"Studying in countries like China isn't only about your prospects in the global marketplace," Mrs. Obama told The Washington Post. "It's not just about whether you can compete with your peers in other countries to make America stronger. It's also about whether you can come together and work together with them to make our world stronger. It's about the friendships you make, the bonds of trust you establish and the image of America that you project to the rest of the world."

China is among the top five host countries for American students studying abroad. After the first lady's speech, students shared experiences in China on a panel moderated by Ann Stock, the assistant secretary of state for educational and cultural affairs.

Nicole Baden, a senior at Howard who studied in Beijing, talked about her awkward exchanges during dinners with her host family that became more comfortable as her language skills improved.

"We look at ourselves differently, but we really are similar," she said.

According to statistics from the Institute of International Education, about 13,000 American students now study annually in China, The Chronicle of Higher Education noted. However, 10 times more Chinese students come to the US for educational programs than Americans study in China.

Brian J. Whalen, president of the Forum on Education Abroad, a membership association of American and overseas colleges, said that the pledge by the Obama administration to increase study abroad rates will need to coincide with changes at college campuses.

Though some Chinese universities and study abroad programs offer classes in English, many American colleges will need to increase Chinese language offerings to allow more students to function in Chinese-only classrooms, he said. According to the Modern Language Association, about 61,000 American students are enrolled in Chinese language courses.