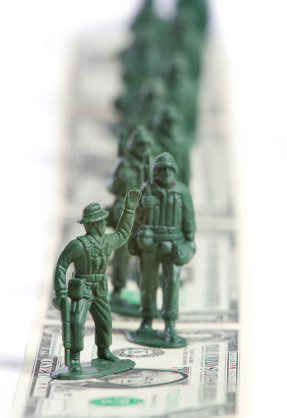 A program that granted $6,000 in tuition assistance to military spouses has been abruptly suspended.

The My Career Advancement Accounts, a program made available by the Department of Defense, was shut down unceremoniously after officials were inundated with applications that threatened to exhaust the program's budget. The Associated Press reports that according to the department, about 98,000 military spouses were enrolled in the program when it was suspended, and 38,000 more had applied.

The program is intended to help military spouses help find portable careers. Military families typically move often, which does not allow for enough time to earn promotions and wages. But now, military spouses are fuming, saying that they were informed of the change at the worst possible time--just as payments are due for classes about to begin.

"It would be different if they gave out some notice," said Jennifer Gilliam, who was enrolled in the program and was interviewed by WSMV in Tennessee. "But just to stop it or if they said, 'As of this date. . .no more funds will be available because of the popularity,' but it was just stopped completely."

Gilliam told WSMV that she found out about the program's suspension from her counselor at the University of Phoenix. Now she is considering paying for her online courses in business management with her credit card.

Military Times reports that the MyCAA shutdown is expected to be temporary, but so far, officials have not given any firm date when it will resume.

Part of the problem, notes The Examiner, is that information is not consistent. According to the official MyCAA Web site, "approved Financial Assistance documents" will not be affected. But spouses who call the phone number provided are informed that classes they are currently taking will be covered, but not future ones.

"There are many of us in programs where certain classes need to be taken at certain times of the year," pointed out Jaclyn Womack, who is enrolled in the program and was quoted by The Examiner. "Nursing school, for example. I know a number of people who if they can't keep up in the school's time line, they are dropped from the program completely."