Millenials Found to Have the Most Stress Nationally 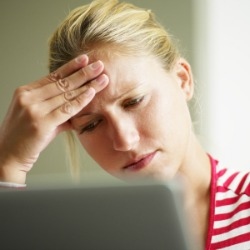 If you are a young adult dealing with what you believe is an unhealthy level of stress, you may not be off the mark. While most Americans report feeling stressed, a new survey from the American Psychological Association suggests that millennials -- young adults age18 to 33 -- rank highest on the stress scale. And, they are also the most likely to engage in unhealthy coping behaviors.

TIME reports that the APA's annual "Stress in America" survey asked 2,000 participants to rank their overall stress level on a scale of one to 10, with 10 representing a "great deal of stress." The results published last week suggest that while the average stress rating for all participants was 4.9 -- which remains above what experts consider to be a healthy stress level -- millennials are especially stressed out. Overall, millennials reported an average stress level of 5.4, which is about on par with Gen Xers, age 34 to 47, although slightly fewer Gen Xers reported their stress had increased in the past year or was resulting in lost sleep. Baby boomers, age 48 to 66, and matures, age 67 and older, reported average stress levels of 4.7 and 3.7, respectively.

According to USA Today, a number of factors contribute to higher-than-average stress levels among young adults, with work at the top. Overall, 76 percent of millennials report work as a primary driver of stress, followed by money (73 percent) and relationships (59 percent). Family responsibilities (56 percent) and the economy (55 percent) round out the list. A sluggish job market may be to blame for work worries topping the list: January statistics show a 13 percent unemployment rate among 18- to 29-year-olds.

"Most of these young people have come out of college or graduate school with horrendous student debt into a job market where there are not very many jobs," Katherine Nordal, executive director for professional practice of the APA, told NBC News. "This has put their life plans, probably, on hiatus."

The APA survey also provides insight into how various generations cope with stress and how higher-than-average stress levels affect them in their day-to-day lives. Results for millennials and Gen Xers revealed that these generations are most likely to engage in unhealthy stress-coping behaviors such as smoking, drinking or overeating. They also report experiencing more stress-related symptoms, including difficulty sleeping or irritability.

Interestingly, while millennials may be more stressed than other generations, another poll published the same week as the APA survey suggests that they are also more optimistic about the future. According to The Huffington Post, a Gallup poll found that four out of five Americans age 18 to 29 believe that their standard of living is getting better, far more than any other age group.