Millions of U.S. Adults Have Some College Experience, But No Degree 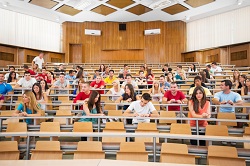 A report from the National Student Clearinghouse recently revealed that as many as 31 million adults have some college experience, but no degree. However, as the report shows, this swath of former students isn't comprised only of students who tried college for a short period of time. In fact, as U.S. News noted, approximately four million students with some college credit have at least two years of college under their belts.

Breaking the numbers down further reveals more details on these 31 million adults who, as a population, are often referred to as "some college, no degree." As Education Week pointed out, more than half of the 31 million adults with some college and no degree are ages 24 to 29, and another 40 percent are over 30. Furthermore, nearly 35 percent attended college for less than one year.

To advocates of higher education, such as Doug Shapiro, executive research director of the National Student Clearinghouse, this news sheds light on the need for more outreach and initiative from non-profit organizations. But the solution shouldn't focus only on young students beginning their career, says Shapiro. Instead, he believes those who can should reach out to adult learners who may simply need additional support or encouragement to finish their degree.

"We've always known there are a lot of people who start college and don't finish. We're trying to get a better handle on who's in that population and really see to what extent this population can become a resource, as opposed to an issue," Shapiro told U.S. News. "It 's widely recognized that we can't reach that goal just by focusing on traditional aged kids coming out of high school."

The National Student Clearinghouse plans to focus some of their efforts on the four million students who have at least two years of college experience -- dubbed "potential completers." The hope is that, by raising awareness and bringing this issue to the forefront, students with some college might consider re-enrolling in school. Part of the solution, according to NSC, includes asking schools to develop specific policies for re-enrollment, rethink their transfer policies, and offer evening and weekend classes.

According to The Times-Picayune, the data uncovered in this study might also be extremely useful to the Obama administration, whose aim is to increase the number of adult degree-holders in the U.S. by 60 percent before the year 2020. Where the U.S. once had the highest percentage of adult degree-holders in the world, it has now fallen to 16th -- a trend that the President hopes to reverse.

One strategy the administration has focused on is allowing for more competency-based education -- a move that would allow students to "test out" of subjects they can prove proficiency in. A bill passed unanimously in the U.S. House of Representatives Thursday would allow Education Secretary Arne Duncan to select up to 30 schools to experiment with competency-based education programs.

"At a time when a college degree matters more than ever, we have to provide a flexible, innovative experience that can meet the needs of every American," Secretary Duncan said in a statement. "This initiative will enable institutions to try some of their best ideas and most promising practices to provide more students with the opportunity to pursue a higher education and become equipped for success in today's workforce."

Career and Education News
Home >
News>
Millions of U.S. Adults Have Some College Experience, But No Degree