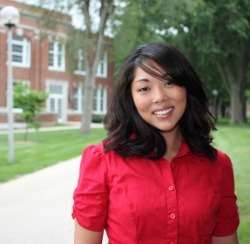 Headlines have long suggested that a persistent achievement gap separates white from minority Americans, and that the former is more likely to go to -- and benefit from -- college. One might expect this to mean whites are more optimistic about the value of a college degree, and are more likely to be encouraged by their parents to earn a degree. Not necessarily, suggests a new survey.

The Next America Poll from the National Journal in conjunction with College Board provides a snapshot of how Americans view higher education within various socioeconomic groups. The results suggest that though minorities -- which included African-Americans, Asian-Americans and Hispanics -- tend to worry more about college affordability than do whites, they are also more likely to consider higher education a valuable investment. Minorities also seem more optimistic that improved college accessibility translates to improved economic prosperity, both at home and at the national level.

"The higher the education mark, the more competitive we're going to be in the world economy," Jose Stathas, a 47-year-old Hispanic man who did not complete college, told National Review. "There's a lot of talk of the rise and fall of the U.S. Unless we step it up a notch, there are going to be parts of the world that eat our lunch."

According to National Review, the results mark a bit of a racial divergence in how Americans interpret the long-term impact of the Great Recession. While college educated workers still tend to enjoy much higher earnings and lower unemployment than those without college degrees, whites are beginning to doubt that any path -- even college degrees -- will pay off in the long run.

"You get a four-year degree, you work at a fast-food restaurant," James Parkinson, a 29-year old white electrician who did not earn a degree, told National Review. "You can go to trades and manufacturing…. I'm not big on going to college for a career that might not even be there in 10 years."

This attitude is less prevalent among minorities, who still tend to view educational attainment as a stepping stone toward fulfilling the American Dream. Perhaps this helps explain another trend. According to Ed Week, the poll suggests that while a large majority of college educated white and minority parents encourage their children to pursue degrees, barely half of white parents without a college degree do the same. Minority parents shepherd their children toward higher education regardless of their own education attainment.

It would seem this parental emphasis on achievement among minorities begins long before college, too. The Kansas City Star reports that another recent national survey found that minority parents worry more about educational quality than do middle- and upper-income white parents, starting at the preschool level. The Star notes that while minority school-age children now fill about half of all the seats in America's classrooms, they still face an achievement gap when compared to white students.

The College Board/National Journal Next America Poll was conducted by Princeton Survey Research Associates International, and included the views of 1,272 adults ages 18 and older.

"Why Minorities Are More OPtimistic About the Value of College," nationaljournal.com, November 7, 2013, Ronald Brownstein, http://www.nationaljournal.com/next-america/education/why-minorities-are-more-optimistic-about-the-value-of-college-20131107