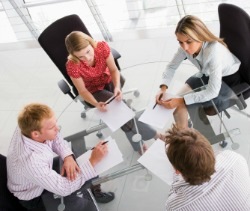 Regardless of what kind of job you have, chances are you have to participate in meetings almost every day, maybe even multiple times a day. According to a press release, an estimated 11 million meetings take place in the U.S. daily. Since we spend so much of our workday collaborating with colleagues, it is important to know how to make these sessions productive and effective. New research shows that certain words can help people be more persuasive and efficient during meetings.

The Wall Street Journal reported that statistics professor Cynthia Rudin and graduate student Been Kim at the Massachusetts Institute of Technology’s Sloan School of Management found that certain words help people appear more persuasive in meetings, which increased the likelihood of their ideas winning acceptance from others. Rudin and Kim analyzed word usage as well as dialogue patterns in 95 meetings to determine which words appeared to be most convincing to colleagues. The most persuasive words included “yeah,” “give,” “start,” “meeting” and “discuss.” In the press release, Rudin explained that while there has been a lot of research on meetings, this particular study is unique because it is the first to use a data-driven approach for analysis.

“There are many published lists of persuasive words, but they weren’t created from a data-driven perspective,” said Rudin in the press release. “We wanted to prove which words are more persuasive using predictive modeling and hypothesis tests.”

It was noted in the press release that some of the words might seem odd or unexpected. For example, the word “yeah” does not seem to be very persuasive. However, Rudin and Kim found that people used the word to express agreement and when others saw that people were in agreement with a statement or suggestion, it was more likely to be accepted.

Another interesting word that made the list was “meeting.” Researchers found that this word was often used as a means of gently moving the meeting onward, as in, “Maybe this is something for the next meeting.” When this proposal was said, it was almost always accepted.

Further analysis showed that dialogue patterns could be used to predict when important decisions are being made during a meeting. The types of communication that predicted when a decision was about to be made included information being provided or requested, suggestions, acceptances or rejections. Rudin pointed out that knowing this could be helpful when listening to recorded meetings as it gives you the ability to fast forward to the key decision.

According to the press release, Rudin pointed out that although more research on the topic needs to be done, these initial findings are still noteworthy.

“Since everyone wants their ideas to be accepted, it’s worth considering word choice in proposals,” she said in the press release. “You don’t want to undermine your idea by not using the right language.”

“Learning About Meetings,” arxiv.org, June 8, 2013, Been Kim and Cynthia Rudin