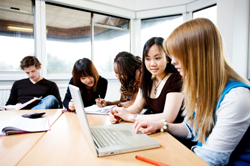 Student programmers from Purdue University have designed a new application for Facebook that acts as a study tool. The program, Mixable, capitalizes on social media by creating study groups and allowing students to share files, all through their Facebook accounts.

According to a Purdue University press release, the goal behind Mixable is to "blend students' social and academic lives into a more engaged learning environment." Inside Higher Ed noted that the application pulls data from course registrations and automatically invites students to join virtual rooms. Students can post comments and start discussions about links, files and other materials relevant to the class--or not. Students are free from any administrative authority and can use the application however they see fit.

Kyle Bowen, director of informatics in the Rosen Center for Advanced Computing at Purdue and lead for the project, told Campus Technology that, unlike other learning-management systems, students control the content on Mixable. "Courses in Blackboard are typically delivered in a top-down fashion, where the faculty drive most activities," he explained. "In contrast, Mixable grants students control of the conversation. Mixable also allows students to share their resources and discussions across courses--something that can be difficult to do with current systems."

In addition to giving students full control over content, Mixable also acts as a course library inside Facebook. Dropbox was incorporated into the application to give students two gigabytes of free storage. Students can easily store and access images, videos, podcasts and documents from anywhere. "Being able to access files from anywhere, whether it's on or off campus, can be challenging as students are always on the go," said Adam Gross, Senior Vice President at Dropbox, in the press release. "With the Dropbox API, we're helping Purdue to make their students more productive."

Purdue CIO Gerry McCarthy told Inside Higher Ed that although Mixable can be accessed through a stand-alone site, it made sense to have it operate within Facebook. "So why go to Facebook? Because that's where the students are," he said. As Campus Technology stated, it takes advantage of the student's "native" environment.

According to Inside Higher Ed, Mixable is still in the development stages. Purdue is giving the application a test run in four courses with plans in the near future to expand to seven. The school expects that the application will be utilized by 500 students by the end of the month. According to McCartney, school officials will monitor the progress of the application. If it does not have a positive effect on learning, McCartney will pull the plug.