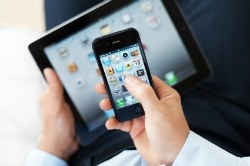 While the Bureau of Labor Statistics' recent January jobs report revealed that the U.S. economy is finally showing promising signs of recovery, a recent study released by technology trade group TechNet suggests that the mobile application industry may be one of the key contributors.

According to a TechNet press release, the so-called "App Economy" has generated 466,000 U.S. jobs since 2007. Prior to that, the market had zero jobs. However, with the introduction of the iPhone and the iPhone App Store, the demand for mobile apps quickly expanded to the billion dollar industry that it is today. Computerworld reported that in 2011, the App Economy generated nearly $20 billion in revenue.

"The App Economy, along with the broad communications sector, has been a leading source of hiring strength in an otherwise sluggish labor market," said Dr. Michael Mandel, the report's author, in the press release.

Indeed, Mandel's research showed that each app created a number of tech and non-tech jobs--programmers, user interface designers, sales, marketing and administrative support staff. Furthermore, although the App Economy has certain hotspots, jobs can be found throughout the nation. According to Computerworld, the metropolitan areas with the highest concentration of app jobs are the New York area (9.2 percent), followed by the San Francisco area (8.5 percent) and the San Jose area (6.4 percent). The press release also noted that while California has the highest percentage of app jobs, more than two-thirds of employment can be found outside of California and New York.

"America's App Economy... demonstrates that we can quickly create economic value and jobs through cutting-edge innovation," said Rey Ramsey, President and CEO of TechNet in the press release. "Today, the App Economy is creating jobs in every part of America, employing hundreds of thousands of U.S. workers today and even more in the years to come."

The Associated Press noted that, in the early stages, the boom was driven primarily by mobile computing and social networking. As the audience demand continued to grow, companies and entrepreneurs alike tried to find an in. According to the press release, app jobs now exist at "pure" app firms such as FarmVille and Words with Friends maker Zynga, as well as at companies that make app-enabled devices such as Google, Apple and Facebook. App-related jobs can also be found at large companies like Electronic Arts, Amazon and AT&T.

Because this industry is so new, Mandel's research was based on detailed information from The Conference Board Help-Wanted OnLine database, which is a comprehensive compilation of employment ads. The Bureau of Labor Statistics has yet to track app jobs.

"Looking for work? There may be an app for that," Associated Press, February 7, 2012, Michael Liedtke