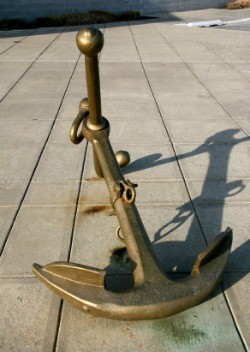 St. Mary's College of Maryland has come up with an innovative solution for housing students after a mold outbreak forced them to leave their dormitories: About 250 students are now living on a cruise ship docked just off-campus on the St. Mary's River.

As The Washington Post reported, students housed in two of the college's dormitories began complaining of sickness soon after classes began. Engineers ultimately discovered the reason why: The buildings' ventilation systems were leaking water and thus creating mold throughout the dorms.

Officials concluded that students would have to be relocated to hotels until the problem could be resolved. That proved to be a challenge, however, because the closest hotels are located miles from campus, requiring some students to drive 30-45 minutes to get to school. When college officials searched for a closer and safer solution, an alumnus suggested moving the students to the ship, the Sea Voyager.

"We followed up on what we thought was just a lark," said Joseph R. Urgo, president of St. Mary's College, who was interviewed by The New York Times. "But the more we found out about it, the more we looked into it, the more realistic it became."

Still, when Urgo first announced that students would be housed on the cruise ship, many believed that it was a joke.

He told The Washington Post that renting the vessel costs a bit less than the $20,000 per day that was being spent to house students at hotels. The relocation will cost about $1.5 million--and that's not including the cost of cleaning up the mold. Students will likely remain on the ship until the end of the semester to allow time to rectify the mold problem.

The Baltimore Sun noted that housing students on a ship has been done before. After New Orleans was ravaged by Hurricane Katrina, students from Tulane University lived for five months on an 800-foot vessel.

"I love the idea that they're using a cruise ship," said James Baumann, director of communications for the Association of College and University Housing Officers, who was quoted by The Baltimore Sun. "If there's one thing I've learned in six years of working for this association, it's that housing people can be incredibly resourceful."

The New York Times reported that many students are excited about living on the Sea Voyager, where the gift shop is now an office for residence officials, the ballroom is a social lounge, and the pub is a coffee shop. Although space is tight, the crew provides laundry service, and students share a bathroom with their roommates rather than with an entire floor of people.

But one of the best perks is the view. "The sunset is right out of our window, and it's amazing," said Caitlin Whiteis, 18, a freshman who was quoted by the Times.

"Staterooms, Not Dorms, All Thanks to Mold," nytimes.com, November 14, 2011, Ashley Southall