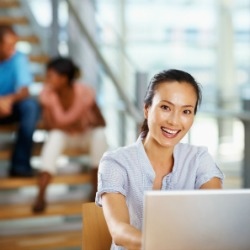 Massive open online courses (MOOCs) -- typically free, online courses hosted by well known universities -- have their share of critics, but their champions deem them revolutionary. By giving anyone, anywhere access to quality higher education, they argue, MOOCs redefine educational accessibility. Battushig Myanganbayar, a Mongolian teen, proves they are onto something.

Myanganbayar is not your typical teenager, reports The New York Times. Living in Mongolia -- where a third of the population is nomadic, living in round felt tents called gers -- he prefers working with electronics to reading "Harry Potter" books or listening to music. Last year, he created a device that would sense approaching cars and trigger a warning light. Its purpose was to warn children playing in apartment driveways to clear out safely. He unveiled Garage Siren on YouTube, demonstrating how it works. The video attracted a lot of attention -- including that of Massachusetts Institute of Technology officials. That was not their first inkling of his skill, however. In fact, MIT first became acquainted with Myanganbayar when he aced its sophomore-level Circuits and Electronics class, a challenging course and one of the first MOOCs ever offered through the startup edX.

In the last 18 months, more than 100 schools have launched MOOCs, including the likes of Harvard, Caltech and the University of Texas. edX, a platform launched by MIT and Harvard last year, was one of the earliest experiments with this type of massively available online education. Myanganbayar's Circuits and Electronics class is challenging even in a classroom environment, and nearly half its MOOC students dropped out. Myanganbayar, however thrived, even though the lectures were in a second language, and even created videos in Mongolian in order to help others students succeed.

"I had never done that kind of thing before," Myanganbayar told the Times. "It was really a watershed moment for me."His teachers and mentors encouraged him to apply to MIT. He just started his freshmen year, one of 88 international students in a freshman class numbering 1,116. Stuart Schmill, the dean of admissions at MIT, said Myanganbayar's perfect Circuits score proved that he can handle the work.

Myanganbayar's story proves two things, reports Boston: First, it implies people really can learn and excel with MOOC-based education. Second, it proves that MOOCs really can identify some of the world's most talented students, funneling them to elite educational institutions. Of course, not all students -- first- or third-world -- will succeed, but according to edX founder Anant Agarwal, that is okay.

"Some people may complete half the course and feel that that is enough for them. But that is not a negative, Agarwal told The Economic Times. "But even that 5 percent were able to do well in an MIT hard class, I think it is good."

For now, MOOC providers like edX and affiliated institutions like MIT will continue to harness their global potential, finding and developing new talent in regions once unreachable.

"The MOOCs may well offer the opportunity for us to get more students from remote areas who haven't been in these magnet cultures," Schmill told The New York Times.

"Mongolian Teen Aces an MIT Online Course, Then Gets Into MIT," bostonmagazine.com, September 13, 2013