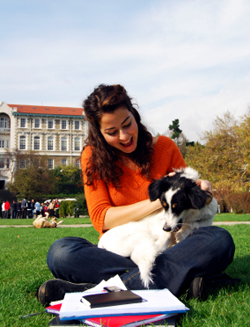 At Yale University Law School, the nation's top-ranked law school, stress is inevitable, which is why last week, the university launched a new pilot program to help students unwind.

According to NPR, the Yale law library offered an unusual checkout option: a certified therapy dog named Monty. Being a therapy dog means that Monty is capable of being handled by many strangers without losing his manners. As the Yale Daily News reported, for three days beginning March 28, students were allowed to check out the brown hypoallergenic 21-pound border terrier mix for 30 minutes to decrease stress.

"It is well-documented that visits from therapy dogs have resulted in increased happiness, calmness and overall emotional well-being," said librarian Blair Kauffman.

Indeed, therapy dogs have been a staple at hospitals, nursing homes and retirement homes since World War II and are now being welcomed at a few other college campuses across the nation. According to ABC News, therapy dogs are brought on campus during midterms and finals at Tufts University, Oberlin College and the University of California San Diego.

Ursula Kempe, president of Therapy Dogs International, told the Yale Daily News that the idea is rather simple.

"If you have a dog interact with a person, and that person has any type of need, the dog is nonjudgmental--he is just there... It is simple, but very beneficial," she said.

Sebastian Swett agreed: "I went with a couple friends, and we could just enjoy sitting around with a dog, not thinking about classes or jobs or any of the other crazy aspects of law school," he said. "Dogs, at least the dogs I've known, love people regardless of who they are, and there is something comforting about that.

According to Kempe, just about any dog can become a therapy dog, provided it likes people, can tolerate other animals and has an even temperament. Furthermore, they can be used in many different contexts, from helping kids learn how to read in front of their peers to providing comfort for people suffering from post-traumatic stress disorder.

Monty's owner, Yale Law access librarian Julian Aiken, told NPR that students love the idea, so much so that all of Monty's daily sessions were fully booked.

ABC News noted that Rajita Sinha, a psychologist and professor of psychiatry and child study at the Yale School of Medicine, agreed with the benefits of therapy dogs and praised the law school for recognizing the need to help students handle stress; however, she pointed out that "not everybody is a dog person, or pet person". Sinha recommended that the university look into other ways to help students deal with stress, particularly during long snowy winters when stress and depression can easily kick in.

Although the pilot program has ended and Monty is no longer available for checkout, The New York Times reported that feedback and comments will be reviewed in order to determine whether Monty will be a permanent library resource during stressful periods of the semester.

"For Law Students With Everything, Dog Therapy for Stress," NYTimes.com, March 21, 2011, Timothy Williams