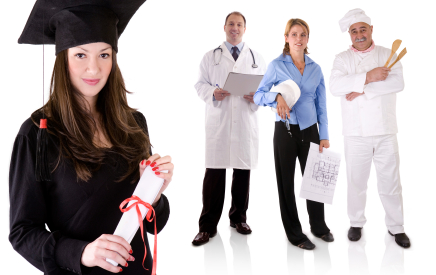 Some hopeful news for college graduates: According to a new study by the National Association of Colleges and Employers, more college graduates will go directly into jobs after completing their degrees this year.

NACE's 2010 Student Survey shows that 24.4 percent of the class of 2010 who applied for jobs will have employment waiting for them after graduation. Last year, only 19.7 percent of graduates had positions lined up at the same time.

In part, employment has improved among college graduates because they have become more realistic about job availability. "A greater number of Class of 2010 graduates accepted the jobs they were offered," said Marilyn Mackes, NACE executive director, in a press release. "There appears to be a greater awareness of the economic realities among this year's graduates, and greater flexibility in the types of jobs they will consider."

U.S. News & World Report notes that college graduates are also benefiting from several industries that are trying to expand: Manufacturing jobs are expected to increase by almost 60 percent for college graduates, accounting firms are still heavily recruiting on campuses, and many government jobs are becoming available.

Mimi Collins, a spokeswoman for NACE, encouraged students to take advantage of their career resource centers. "It's an important resource and one of the only times in life that you'll have something like this," she was quoted as saying in West Virginia University's student publication, The Daily Athenaeum. "Finding a job, and I hate to use a cliché, is a job. Career centers will help you connect to employers, provide workshops to help you ready resumes and aid you in ways that you probably will never have again in the workforce."

"Many Graduates Taking First Job Offered After College Due to Economy," The Daily Athenaeum, May 14, 2010, Jerry Hildenbrand

"One-Quarter of College Class of 2010 Have Jobs Waiting," National Association of Colleges and Employers, May 6, 2010