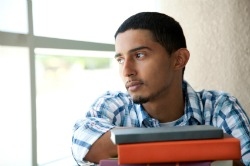 As reported by The Wall Street Journal, a survey of more than 100,000 students at 129 schools conducted by the American College Health Association found that about 11.6 percent of college students were diagnosed or treated for anxiety in the last year, and 10.7 were diagnosed or treated for depression. Such psychiatric disorders can impact academic achievement by affecting concentration, sleep and cognitive processing.

Those cases appear to be rising throughout the country. As the Star Democrat in Maryland reported, Jeri Boliek, the triage services coordinator for the University of Maryland, College Park's Mental Health Services unit, said that this semester, 687 patients were seen--a 20 percent increase over last year. She also said that the center has seen a 50 percent increase for those seeking urgent care, such as having suicidal thoughts.

"We know that suicide is a definite risk," Boliek told the Star Democrat. "It's the second-leading cause of death in college students, the first being accidents."

Other institutions in Maryland have seen a similar trend, including at Salisbury University, McDaniel College and Loyola University.

"I've been at Salisbury for five years," said Kathy Scott, director of the university's counseling center, who was interviewed by the Star Democrat, "and I do know that our numbers have increased each year since I've been here."

Data from the American College Counseling Association indicates that the severity of the problems has increased as well: While a decade ago, 16 percent of students in counseling had serious psychological conditions, today the number has risen to 44 percent.

Sam Cochran, the director of University Counseling Services at the University of Iowa, attributed the increase to several factors. He told the Daily Iowan that he thinks high school students are receiving better treatment before starting college, allowing them to consider higher education despite mental illness. He added that today's parents and students are much more knowledgeable about resources at college, and that there is far less of a stigma attached to receiving mental health care.

Boliek noted that the difficult times undoubtedly play a part as well. "Offhand, I would say it's just the overall economy, the overall bad news that we're all listening to and subjected to, so I think that's just increasing the level of stress about their own lives," she told the Star Democrat. "And we're pretty bombarded with the news, so I have to think there's a lot of bad news and we're hearing more of it."

"A Serious Illness or an Excuse?" online.wsj.com, December 13, 2011, Andrea Peterson