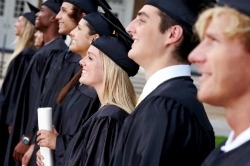 A number of institutions have recently created or are considering creating programs that allow students to earn their degrees in three years.

"The economic downturn has encouraged more students and families to consider the three-year option, and for academically well prepared and highly focused students, these programs can be very attractive," said Tony Pals, director of communications at the National Association of Independent Colleges and Universities, who was quoted by U.S. News and World Report. "These programs can represent a significant cost savings for consumers."

According to U.S. News, many institutions introduced three-year programs as recently as fall 2011, including Grace College and Seminary, Baldwin-Wallace College, Lesley University, and St. John's University. Such programs allow students to save money and start their careers or graduate degrees earlier.

"Twenty-five percent is saving a whole year right up front," explained William Katip, provost at Grace College, who was interviewed by U.S. News. "The other 25 percent: Our annual tuition is very close to what our first-year graduates make. The fact is, you're out working and you've got one year of earnings."

"The idea is to encourage students to take advantage of programs in place and get a head start on college," he told the Zanesville Times Recorder. "They can gain credits prior to graduating high school and shorten their time in college. We're asking state colleges to define the plans for students, something the students have done themselves in the past."

While three-year degree programs undoubtedly cut costs considerably, critics have said that the vast majority of students are not equipped to handle such rigorous programs. Daniel J. Hurley, director of state relations and policy analysis for the American Association of State Colleges and Universities, pointed out in USA Today that according to federal data, 57 percent of first-time, full-time freshmen students earn their degrees within six years, not four.

Hurley noted that the three-year bachelor's degree has one fundamental flaw: "It benefits only those students who have the highest academic aptitude and financial means to attend college full-time, year-around, for three years."