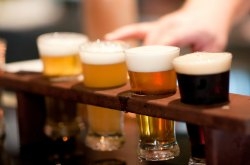 Beer brewing is not your typical college course. More and more schools, however, seem to be offering it. According to the Houston Press, Rice University is the latest addition with its "Beer Beyond the Hedges" seminar, offered through its Glasscock School of Continuing Studies.

The course will be taught by long-time beer brewer Bev Blackwood II, who once worked for Houston's Saint Arnold Brewery. Students in the course will visit the Saint Arnold Brewery as well as the Buffalo Bayou Brewing Company. They will also participate in beer tastings and do coursework focusing on the history of beer, the brewing process and how various beers are made.

Appalachian State University in North Carolina is one school that seems to have found success in beer-related courses. Last year, it offered its honors-level "Intro to Beer Brewing" course strictly for chemistry students, according to The Daily Meal. The plan was to expand those offerings, and, according to the school website, a Bachelor's of Science degree program in Fermentation Sciences was just approved in June 2012.

Another successful course was offered at Niagara College in Ontario, according to the National Post. The school's two-year diploma program -- Brewmaster and Brewery Operations Management -- is in its third year, and its first class graduated in June. With an on-site brewery designed by Professor Jon Downing, hands-on brewing is an integral part of the program. Students also learn about quality control, packaging and can do an internship through the Ontario Craft Brewers Association.

"There's really no practical course in the world like us, at least nowhere where the students are hands-on every week of their academic life," Downing said in the National Post. "They're in here making beer, running filters, working with pumps, all that sort of thing."

Downing also added that every student in the 30-plus member graduating class had secured work in the industry -- some even doing so before receiving their diplomas.

Other schools offering related coursework include Oregon State University and the University of California, Davis Extension. At OSU, students can pursue a Bachelor's of Science degree in Fermentation Science and do coursework on food safety, food engineering, chemistry and biology. Courses include those such as "Brewing Science" and "Brewing Analysis." The school also notes that graduates have a high job-placement rate.

The UC Davis program offers an 8-week Professional Brewers certificate as well an 18-week Master Brewers program, which can lead to a diploma. In addition to that, the school offers courses such as "Brewing Basics: Going Beyond the Kit" and "Introduction to Practical Brewing."