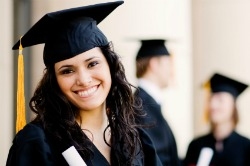 Freshmen entering college might find that some schools and universities are offering a guarantee when it comes to graduation: that students will complete a bachelor's degree and graduate within four years.

About 15 institutions of higher education already offer or have decided to offer this program, reported The New York Times. Most are small, private colleges such as Randolph-Macon College in Virginia (which began the guarantees this year), Baldwin-Wallace College in Ohio (which will initiate the program in fall 2012) and University of the Pacific in California (which introduced the concept in 1991). However, a few public schools are on board as well, such as California State University, Fullerton and Western Michigan University.

"The four-year graduation guarantee is an approach we will see more private colleges take in coming years," Tony Pals, a spokesman for the National Association of Independent Colleges and Universities, told The New York Times. "More students and parents want assurance that their tuition payments are going to be worth it."

This trend in colleges and universities requires that incoming freshmen follow certain rules. In signed contracts, these students agree to follow specific behaviors, such as remaining in good academic standing, regularly consulting with advisors and allowing their school to share grades with their parents or guardians. In exchange, the school promises students that they will finish their degrees within four years. If the school is unable to meet that promise, it will cover the tuition for the extra semesters needed, usually up to one additional year.

These guarantees save students and parents from having to pay additional costs and alleviates fears of having to do so for an unknown period of time. They also give students more incentive to complete their degrees within four years. About 80 percent of undergraduates at private colleges and universities earn their degrees in four years, whereas at public institutions, where tuition generally is lower, about 50 percent do, according to U.S. Department of Education data, The New York Times reported.

Many students take five, six or more years to finish, noted Baldwin-Wallace College News. Those who do can suffer lost earnings potential due to delayed entry into the workplace--as much as $28,000 to $60,000 a year--along with costs of additional tuition, room/board and other education-related expenses.

Nationally, the four-year graduation guarantee remains experimental. Because many schools began offering it in 2008 or later, it's too early for results, The New York Times indicated.

Some students, however, are still unable to graduate within four years. As the Omaha World-Herald reported, the University of Nebraska is implementing a new policy in fall 2012, which will limit most bachelor's degree requirements to a maximum of 120 credit hours. In the last decade, degree requirements have increased to 125 credit hours or more, which has been enough to keep many students in school for a fifth year.

"This provides the opportunity to graduate sooner," University of Nebraska at Kearney Chancellor Doug Kristensen told the Omaha World-Herald. However, he added, "This does not guarantee that people will graduate sooner."