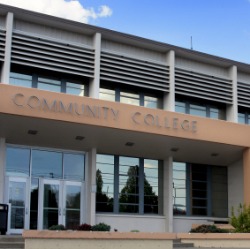 Some community colleges have begun offering housing options and other services in an effort to retain students and boost graduation rates.

Community colleges are often known as "commuter schools". As a more affordable option than four-year universities, many community colleges lack on-campus housing so students live off campus and commute to and from school in order to earn their certificate or two-year degree. According to The Wall Street Journal, however, some schools are trying to shed that image, hoping it will help increase graduation rates.

Federal data from 2010 showed that about a quarter of community colleges offered housing to students. Though exact numbers are not available, officials say that many more community colleges have started to offer housing in the past few years.

Some schools are offering other perks to help students outside the classroom. For example, after a $4.5 million addition to its South Bend campus, Ivy Tech Community College now offers on-campus dining, a more extensive bookstore and a student center. Last year, City Colleges of Chicago opened wellness centers at all seven schools. The system's graduation rate jumped to 12 percent for the 2012-13 academic year, compared to 7 percent four years ago.

Because community colleges tend to cater to less affluent families, however, there are some concerns. As The Wall Street Journal pointed out skeptics worry that the new services will bump up tuition costs, adding to student debt or making community colleges less accessible for some. Indeed, in July when The Des Moines Register reported on local community colleges offering housing with lavish amenities, some experts cautioned students.

"Some of this stuff is just crazy," said Heather Doe, spokeswoman for the Iowa College Student Aid Commission, in The Des Moines Register. "If you are borrowing to live that lifestyle, you really need to keep in mind you have to pay that back."

Most officials, however, believe that the services will have a positive impact.

"If you really can help students stay in school, there's also an economic payoff," said Kathy Mannes, a senior vice president at the American Association of Community Colleges, to The Wall Street Journal. Mannes added that community colleges still have students' best interests in mind: "There are lots of ways students fall through the cracks. We're not meant to be social-service agencies, but we're meant to find whatever ways we can to help out students get to the finish line," she said.

Other community colleges are taking a slightly different route to boost graduation rates. According to azcentral.com, the Maricopa County Community College District plans to hire 360 full-time faculty members over the next five or more years. Studies have found higher retention and graduation rates among students that attend colleges with more full-time faculty than part-time, and officials at the Maricopa Community Colleges hope that having more resident faculty to engage with students will enhance outcomes.

"We're going to focus on the fact that faculty are to be asked to not only teach students but to help us understand a better pattern of success," explained Rufus Glasper, chancellor of the college district, in azcentral.com. "We'll be asking faculty to do more in terms of advisement and more things with clubs -- to actually be on campus more and be around more of our students."