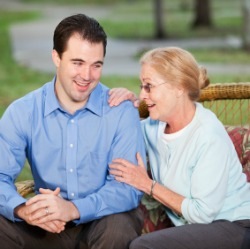 In a new trend, employees in their 20s and 30s are involving their parents in their work lives more than any other generation, taking them to company events and even to job interviews. Some organizations are trying to foster the parent-child relationship so their workers stay happy and loyal, The Wall Street Journal reported.

Northwestern Mutual, for example, a financial services firm, invites parents of its college-aged interns to open houses. Managers sometimes call or send notes to parents when interns meet their sales goals, allow Mom and Dad to sit in on their child's job interview and may even make house calls to parents.

Eight percent of recent college graduates took their parents with them on their job interview, a 2012 survey revealed, and 3 percent had their parents present during their job tryout.

Companies are also encouraging their workers to invite their parents for a look at their workplace and job, Business Insider noted. Google is one, and in May held its second "Take Your Parents To Work Day." Other companies -- Mindjet, Regus and Trulia -- have indicated they plan to follow suit. LinkedIn has scheduled an international "Bring In Your Parents Day" for November. Its event, to be held in 14 countries, will encompass tours, presentations and question-and-answer periods. LinkedIn believes such a practice boosts morale and helps parents understand their children's jobs.

Compared to some other countries, in Asia and South America specifically, parental involvement in the U.S. is minimal. Only six percent of recent college graduates in the U.S. wanted their parents to receive a copy of their job offer letters, a new PricewaterhouseCoopers survey of 44,000 people from more than 20 countries showed. In some countries, 30 percent of graduates wanted their parents to receive such letters, while the global average was 13 percent.

Is involving parents in work a good idea? Research has shown, The Huffington Post indicated, that overinvolved, or helicopter, parents can lead to worse performance and dissatisfaction on the part of their children. At the same time, however, perhaps Millennials deserve the support as they've have had a tough time in the labor market due to the sour economy.

Balance is key, Marie Artim, vice president of talent acquisition at Enterprise, told The Wall Street Journal. Whereas incorporating parents in the hiring process can be helpful, companies need to avoid overdoing it.

The attention being paid to parents has created some challenges in the workplace. For instance, human resources professionals must abide by privacy rules, which keep them from sharing certain information with parents, like why their child didn't get a job.

"This is a situation that's odd and uncomfortable to say the least," says Jaime Fall, a vice president of the Human Resources Policy Association.

"Should You Bring Mom and Dad to the Office?" online.wsj.com, September 10, 2013, Anita Hofschneider