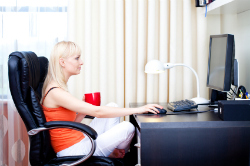 Individual case studies have shown that flexibility in the workplace has lasting benefits. Solix, Inc., for instance, once enforced a culture of micromanagement, which resulted in a 15 percent turnover rate and three percent absence rate. Since implementing a more relaxed culture and flexible work schedule, however, turnover has dropped to under five percent, the absence rate has dropped to 0.6 percent of hours worked and revenue has tripled in the last six or seven years, said Solix's CEO John Parry.

"If you treat people like adults--and you do the right job on hiring people that have the right kind of values--you know they're going to try to get things done," explained Parry.

Indeed, experts stated that when employees feel like their needs are being met, they are more likely to go the extra mile at work. Moreover, a separate article in Fortune noted that a Dice.com survey revealed that one-third of IT job seekers would be willing to take a 10 percent pay cut for the option to work from home full-time.

"What's remarkable is that, even after two years of flattish compensation, technology professionals are willing to sacrifice $7,800 on average to work from home," noted the Dice report.

According to The Wall Street Journal, flexible work schedules, including the option to work from home, are particularly popular in the Bay Area where tech companies are more inclined to have informal job structures. Almost six percent of Bay Area workers work from home, that's more than the national rate of four percent and higher than major metropolitan areas such as New York, Boston and Los Angeles. In San Francisco specifically, the rate is even higher--6.7 percent.

"Working at home is much more of a San Francisco phenomenon," said Ted Egan, the city's chief economist.

Indeed, so many SF residents work from home that businesses are now making a profit off of renting desk space to workers who want to temporarily escape their home office. Citizen Space, for example, offers home-based workers shared office space, including whiteboards and a kitchen. Workers can rent a desk for a day for free or pay a monthly rate to have a desk during normal business hours.

While flexible work schedules can be an obvious benefit, it's important to note that it does come with sacrifices from both employee and employer, reported Fortune. Chris Doyle, a managing director and partner at Public Financial Management, has enjoyed a flexible schedule for 19 years. However, she pointed out that working irregular hours meant that she wasn't able to grow her portfolio of clients as quickly as some of her colleagues.

Nonetheless, a survey conducted by the Families and Work Institute revealed that 87 percent of respondents said flexibility plays an important role in their evaluation of a new job offer. So if companies want to attract top talent, they'll have to include it as a key feature in their human resources package.