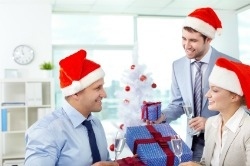 In an effort to boost morale, more employers said they planned to host holiday parties this year. Employees, however, were not so thrilled with the idea.

According to a CareerBuilder survey that included more than 4,000 workers and 2,600 employers, 58 percent of employers are planning holiday parties this year, an increase from 52 percent in 2010. Bonuses and gifts are on the rise, too, as companies strive to give their workers a festive pat on the back for a difficult year of growth.

"Employers have been working hard to build back their businesses over the last year and this holiday season are planning to reward their biggest asset--their people--with a few holiday perks," said CareerBuilder Vice President of Human Resources Rosemary Haefner in a press release.

According to another survey conducted by Harris Interactive on behalf of GlassDoor.com, however, this increase in holiday festivities may not be enough. A GlassDoor press release noted that a whopping 72 percent of employees surveyed would gladly exchange holiday shindigs for raises and cash bonuses. Only four percent of respondents said they wanted a holiday party, even if it was open bar.

"During tumultuous times, cash is king," GlassDoor Career and Workplace Expert Rusty Rueff told FINS. "Until employees feel confident in their jobs, have cash in their pockets, can take care of the basics, and have enough time to take care of what needs to get done, everything else feels like fluff."

So what else besides cold hard cash would employees appreciate? According to the GlassDoor press release, paid time off, grocery gift cards and the freedom to work from home for a year also ranked high.

"What we found most surprising was that 32 percent of employees wanted additional paid time off that doesn't count toward their vacation days," said Rueff to FINS. Rueff pointed out that the desire for more personal time is a sign that the culture of hard work and the fear of layoffs are taking its toll on employees. "In the past, I don't think we would have seen that."

But while employees may feel more strapped for cash (and free time) compared to the pre-recession era, CareerBuilder reported that they are still feeling a little festive amongst themselves: Twenty-two percent of workers said they planned to buy holiday gifts for co-workers this year despite their tightened purse strings.