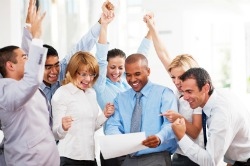 More and more companies are using video game elements in the workplace to engage employees.

Known as "game IT" or "enterprise gamification," companies are using various competition and reward components, similar to those found in games, to inject some fun into otherwise mundane tasks like data entry, reported The Wall Street Journal. For instance, employers may issue points, badges or other rewards to workers who reach certain goals and track progress on leaderboards to motivate and encourage friendly competition among staff members.

"Leaders are beginning to understand the enormous opportunities that games hold for businesses, brands and people, " Judah Schiller, chief executive officer and co-founder of Saatchi & Saatchi S, a brand development agency that conducted a survey on the topic earlier this year, said in a press release. "Games, challenges and the notion of weaving fun and play into the fabric of society are tantamount to a renaissance. Well-designed games have the potential to create dynamic, rich and deeply enjoyable experiences that can foster innovation, reinforce positive behavior and increase engagement."

According to The Wall Street Journal, some companies create their own games, whereas others hire outside firms such as Bunchball Inc. in San Jose, Calif., and Badgeville Inc. in Menlo Park, Calif., to come up with games for them.

This trend and the resulting industry are rapidly increasing. About 55 percent of Americans said they were interested in working for a company that uses gamification to increase productivity, the Saatchi S survey, "Engagement Unleashed: Gamification for Business, Brands and Loyalty," showed, as outlined in the press release.

Additionally, by 2014, about 70 percent of large companies will use gaming strategies for at least one business process, estimated Gartner, a tech industry research company, The Wall Street Journal indicated. Also by then, revenue from gaming software, marketing and consulting will hit $938 million, up from $100 million this year, according to M2 Research, a market research firm.

"The reason why gamification is so hot is that most people's jobs are really freaking boring," explained Gabe Zichermann, organizer of last month's "Gamification Summit" conference.

Furthermore, he warned that "adding gamification to the workplace drives performance, but it doesn't make up for bad management. If you are a bad manager, gamification won't help you."

"Gamification Gets Down to Business," forbes.com, September 15, 2011, Tim Clark