More Disgruntled Employees Say They Would Not Recommend Their Employer 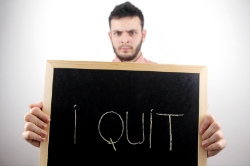 Although unhappy employees may be reluctant to quit, a recent survey shows that those who are leaving are so disgruntled that they would not recommend their employers to others.

Research and advisory services firm the Corporate Executive Board Co., analyzed data from exit surveys of more than 4,300 employees from 80 companies with annual revenues of more than $2 billion and found that more than 75 percent of departing employees would not recommend their former employers to friends and peers, The Wall Street Journal reported. That is the worst percentage in at least five years. Brian Kropp, a managing director with the CEB, speculated that the decline in satisfaction is a result of poor treatment during recent economic hardships.

"Companies were blunt and rough and tumble with their work force," Kropp said. "They created a sense that 'the company doesn't care about me',".

Indeed, the weak economy has forced many employers to cut back. And as a result, employees end up taking on more work, but sometimes with lower pay or less benefits.

Life Inc. noted that in 2006, just 41 percent of employees reported that they would not recommend their former employer. That percentage remained fairly unchanged through 2008, but began to escalate as the recession continued and has almost doubled this year.

Additionally, CEB found that approximately one out of every four workers quit their current job without having a new job lined up, a sign that workers are so fed up that they would rather be unemployed than continue at their current job.

According to BNET, a separate CEB survey showed that high-potential employees are the most disgruntled, which can cost a company 3.5 times that person's annual salary to find a replacement as well as recoup lost revenue due to disrupted business relationships or damaged company reputation.

High-profile or not, The Wall Street Journal noted that most companies rely on referrals from current and even former employees to find good candidates so the fact that so many workers are leaving disgruntled does not bode well for recruiting efforts.

Portoflio.com noted that the data highlighted the need for companies to be in tune with their employees' needs if they want to retain their work force.