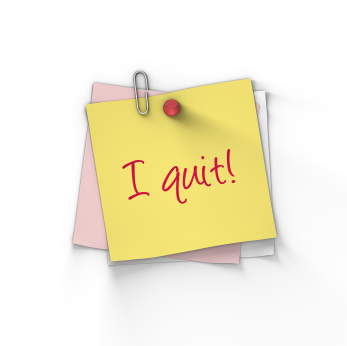 For the first time since October 2008, the Bureau of Labor Statistics reported that more workers quit their jobs than were laid off in February and March--and that number is expected to grow.

The Wall Street Journal reports that according to the Labor Department, nearly 1.9 million employees chose to leave their jobs in March, compared to more than 1.8 million who were laid off or discharged.

According to human resource experts, two factors are causing employees to move on to other jobs: Some are feeling more confident about the economy and are therefore looking for better opportunities. And others are leaving their positions because cost-cutting and downsizing have negatively affected their morale.

"Employees feel disengaged with their jobs, which is going to lead to a lot of churn as we come out of the recession," noted Brett Good, a district president of Southern California for recruiting firm Robert Half International, who was quoted by the Journal.

The recession has clearly taken its toll on employees. According to a survey by human resources consultant Right Management, 79 percent of 800 employees surveyed said that their workloads increased because of layoffs at their company, and 57 percent responded that workloads have grown "a lot."

Good told the Journal that Robert Half International is currently advising clients to reach out to employees with town hall meetings and one-on-one sessions in an effort to prevent workers from quitting. That's because turnover can be expensive, explained Michael Haid, senior vice president of global solutions at Right Management: The cost of recruiting a new employee can typically amount to half the position's annual salary.

In a related story, MSNBC.com reports that the recent spate of corporate crises at companies such as BP, Toyota and Goldman Sachs have also contributed to sinking employee morale. Some companies have tried to address such concerns: According to Toyota spokeswoman Celeste Migliore, the automaker held town hall meetings, allowed employees to pose questions to the executive staff, and created an internal Web site to better inform employees in an effort to reach out to workers. She noted that as a result, Toyota employees are "feeling much better" knowing what's going on with the company.

"More Workers Quit Than Were Laid Off in March," The Wall Street Journal, May 12, 2010, Sara Murray