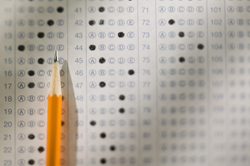 In a press release ACT reported that the number of test takers has increased by 30 percent since 2006. Nearly 1.6 million students--or 47 percent--of 2010 U.S. high school graduates took the ACT, compared to 1.2 million--or 40 percent--in 2006. However, despite steady and substantial growth in the number of students taking the ACT, scores have increased just one percentage point from last year and three percentage points from five years ago.

In response to the data, U.S. Secretary of Education Arne Duncan said, "President Obama has set an ambitious goal that the United States will lead the world in college completion by the end of the decade. While the college readiness of our students has been gradually increasing in recent years, it isn't nearly enough to meet this goal."

The Wall Street Journal reported that the results have made many question how well the nation's high schools are preparing students for college. Over the years, elementary schools have shown academic progress, but high schools have been less successful. "High schools are the downfall of American school reform. We haven't figured out how to improve them on a broad scope and if our kids aren't dropping out physically, they are dropping out mentally," said Jack Jennings, president of the Center on Education Policy.

Based on scores from the graduating class of 2010, only 24 percent had scores that met or surpassed all four ACT College Readiness Benchmarks--math, reading, English and science. Fifteen percent met only one and 28 percent did not score high enough in any subject to demonstrate college readiness.

ACT officials and experts placed the blame on poor high school curriculum. Seventy-one percent of all test takers took at least the minimum recommended core curriculum--four years of English and three years each of math, science and social studies--but still a majority of students were not college ready. "We have a conflict where we are trying to increase the rigor and push kids to learn more, yet we try to do all of this in the same 180 days, 40-50 minute classes we've always had," said Joseph Harris, director of the National High School Center at the American Institutes for Research.

Disparity within a more diverse test taking population may have also leveled scores. According to the press release, ethnic/minority students made up 29 percent of this year's test taking population. Hispanic test takers alone nearly doubled since 2006. However, although more minority students are taking the test, their scores remain flat or decrease--according to the study, the average score for Hispanic students in 2010 was 18.6 and the average score for African American test takers was 16.9. Asian American/Pacific Islander graduates had the highest average score--23.4--followed by White students with 22.3.

Despite the modest gains in college readiness, some remain hopeful, reported Inside Higher Ed. "Admittedly, it's slow progress, but the trend is a positive one," argued Cynthia Schmeiser, ACT's education division president and chief operating officer. Schmeiser and other ACT officials stated that the increasing number of test takers illustrates that more and more students are working towards being college ready. Furthermore, in the press release, Schmeiser noted that the new population of test takers is "more representative of the U.S. population [and thus] we're seeing a clearer picture of the condition of college and career readiness in this country".

Nonetheless, all experts stated that much improvement is still needed. Schmeiser agreed with Secretary Duncan in Inside Higher Ed, saying, "All in all, even though progress is headed in the right direction, we still have a lot of work to do."