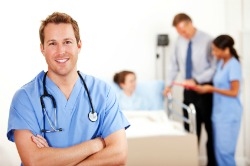 Headlines often celebrate the inroads women have made in fields traditionally dominated by men, but according to one new report, workplace equality is becoming more of a two-way street.

The New York Times reports that more men are making the shift toward so-called "pink-collar" jobs, or those traditionally dominated by women. In its analysis of Census data from 2000 to 2010, for instance, The Times notes that occupations that are more than 70 percent female -- such as teaching or nursing -- accounted for almost a third of all job growth for men.

Just as surprising as the extent of the shift itself is, perhaps, the men making it: According to The Times, a study by Mary Gatta, the senior scholar for Wider Opportunities for Women, and Patrician A. Roos, a sociologist at Rutgers, men who assumed pink-collar jobs between 1970 and 1990 tended to be foreign-born, non-English speakers with very little education. Today, however, the trend has spread to include men of nearly all races and age groups, and more than a third have college degrees.

There are a number of reasons more men might pursue careers traditionally held by women, not the least of which is economic pressure: Recent studies have found that the recession has been particularly difficult on men, especially for those without a college education. This reality is forcing them to lean toward careers their fathers would have shunned as "women's work."

The New York Times notes that in interviews, however, many men played down the economic factor, noting that the stigma associated with choosing these types of jobs had faded. These jobs are more appealing because they are more personally satisfying, they noted.

Meanwhile, Forbes contributor James Poulos argues that the trend is more indicative of men's changing attitudes of masculinity on a much larger scale.

"In an economy where many men are feeling all too useless and interchangeable, experiencing a recovery of their basic humanity might be especially helpful to recovering their experience of masculinity," writes Poulos. "Within the confines of business, 'women's work' offers guys a path to emotion, particularity, and something we might call conductivity."

But while this new workplace dynamic might equate greater gender equality on paper, The Atlantic Wire notes that men still tend to earn more than women, even in female-dominated occupations.

"Simply because higher-educated men are entering these jobs does not mean that it will result in equality in our workplaces," Gatta told The Times, which notes that the trend may even reverse when the economy perks up.

Still, many are hopeful that more women making strides in the board room and more men pursuing pink-collar careers will eventually close the professional gender gap.