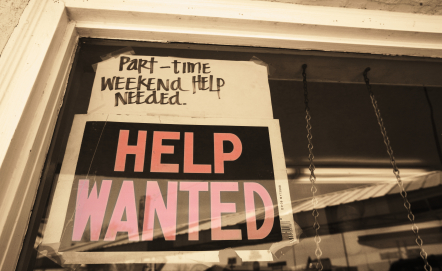 An increasing number of workers are holding down part-time jobs because their hours have been cut back or they've been unable to find a full-time job.

Fox News reports that according to the Bureau of Labor Statistics, 8.3 million people throughout the country are "underemployed," meaning that they are working part-time because they have not been able to find full-time jobs, or they are overqualified for their current positions.

David Fagertrom, 63, is one such example. After losing his job as a business operations analyst, he now earns part-time income as an adjunct economics professor at Northern Essex Community College in Massachusetts. But he told Fox News that his salary is only a fraction of what he used to earn, and barely enough to make ends meet.

"There's the initial unemployment rate, which counts people that have been looking for jobs in the past four weeks," explained Alan Clayton-Matthews, an economist at Northeastern University in Boston who was interviewed by Fox News. "But there's also a wider measure called U-6 which also counts people that are employed part-time involuntarily and that unemployment rate is 17 percent right now in Massachusetts, whereas the official unemployment rate is 9.4 percent. So there are a lot of people who are in the same position."

In a possible nod to the trend, the New York Daily News reports that state filings for licensing of real estate brokers and security guards jumped in December compared to the year before. One reason for the increase in filings may be that both jobs allow for evening and weekend work--an advantage for part-time workers hoping to earn extra income during free hours.

In a related story, The Wall Street Journal reports on employees trying to make the move from temporary to permanent, full-time work. According to Jody Miller, chief executive of the Los Angeles-based interim-executive placement firm Business Talent Group, there has been a 50 percent increase in requests for temporary talent in 2009 over 2008.

But there is good news: Some part-time temporary workers have successfully been hired as full-time workers. Such was the case with Diana Galvin, who originally joined Conrad & Co. in Spartansburg, South Carolina as an interim, part-time employee. When senior management saw that she had desirable skills, they hired her as a full-time accountant.

"As we talked, they learned I had more skills that what they contracted for," Galvin explained to the Journal.