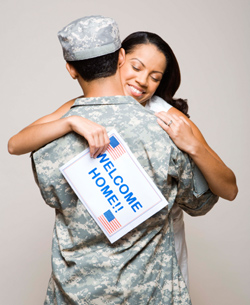 The Department of Veterans Affairs (VA) announced in a press release that more than 1,100 schools have entered into more than 3,200 agreements to reduce the tuition for student veterans in the upcoming academic year as part of the "Yellow Ribbon" program.

The Yellow Ribbon program is part of the new Post-9/11 GI Bill, which allows VA and participating schools to share the responsibility of supporting student veterans. Under the program, when a school contributes additional tuition aid, VA will match them dollar-for-dollar up to 50 percent of the difference. In addition to tuition, the program also provides a housing allowance and a stipend for books and supplies.

According to The Washington Post, the Yellow Ribbon program dramatically expanded benefits over the original 1944 GI Bill. The GI Bill had made education affordable for millions of World War II veterans, but rising tuition costs in recent years made it difficult for VA to keep up.

The list of colleges and the amount of subsidies varied widely. Harvard, for example, will contribute a maximum of $3,000 each for 50 undergraduates and $20,000 each for 20 law school students. Texas A&M University, on the other hand, will cover up to $13,800 each for 24 undergraduates.

VA reported it had launched additional outreach efforts in January to encourage more schools as well as returning veterans from Iraq and Afghanistan to participate in the Yellow Ribbon program. According to The Washington Post, as of the spring, 228,994 veterans across the country used the new benefits to enroll in school. Approximately 22,500 students enrolled in private schools.

VA officials told Army Times that they were pleasantly surprised by the steady participation in the program. Many were concerned that some colleges would decide to drop out due to tightening economic conditions.

Rules for applying for benefits vary from school to school and have eligibility limits. According to the press release, veterans must have served at least 36 months on active duty or at least 30 consecutive days before being discharged for a service-related injury. The Washington Post added that service members and veterans can also transfer benefits to family members. A spouse, for instance, could use the benefits any time within 15 years of when the service member left active duty.