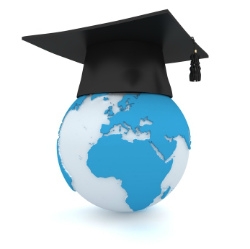 The annual "Open Doors" report from the Institute of International Education found that the number of international students enrolling in U.S. colleges rose 5 percent in 2010-11 to 723,277. Moreover, American students studying abroad increased 3.9 percent in 2009-11 to 270,604. Both totals are records.

"It's really catching on around the world that this is a central part of education," said Allan E. Goodman, president and CEO of IIE, who was quoted by Inside Higher Ed. Nevertheless, he pointed out that the number of American students studying abroad represents less than 1 percent of the student population. "We have a long way to go and many, many more Americans, community colleges, baccalaureate and research universities ought to have an international component to their experience, and it's really going to take every one of us to get there."

Both increases were regarded as extremely positive trends, particularly because the rise in study abroad follows a 0.8 decline last year as a result of the economic recession.

As The Chronicle of Higher Education reported, much of the growth in foreign enrollments in US schools was attributed to China and Saudi Arabia. The number of Chinese students increased by over 23 percent to 157,558, while the number of Saudi students rose by 44 percent to 22,704.

Peggy Blumenthal, executive vice president and chief operating officer of IIE, said she expects that Chinese students will continue to enroll at American campuses. "The kind of education that they can get here is really not able to be duplicated, either in a branch campus or in a partnership, or in a school, an institution in China," she told Inside Higher Ed. "We just have a very different way of teaching and learning that is very attractive right now to Chinese parents and students."